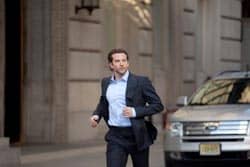 The woman said to the serpent, "We may eat of the fruit of the trees in the garden;but God said, 'You shall not eat of the fruit of the tree that is in the middle of the garden, nor shall you touch it, or you shall die.'" But the serpent said to the woman, "You will not die; for God knows that when you eat of it your eyes will be opened, and you will be like God, knowing good and evil" (Gen. 3:2-5).

Happy are those who find wisdom,
and those who get understanding,
for her income is better than silver,
and her revenue better than gold (Prov. 3:13-14).

If you could take a pill that would exponentially increase your intelligence, memory, and motor skills, would you swallow it? Even though it lasted just for a day and you do not know if there are any side effects? That is the question faced by a down-on-his-luck writer Eddie Morra (Bradley Cooper) in director Neil Burger and writer Leslie Dixon's film, based on Alan Glynn's novel The Dark Fields. I was thinking that this would be another cautionary tale like Dr. Jekyl and Mr. Hyde, The Fly, The Hollow Man, or any number of other such films (and yes, even The Tower of Babel story in Genesis), but in the last act, the plot moves in a very different direction.

Eddie is a scuzzy-looking guy living in a trash-heap of a flat, unable to finish even the first page of the novel he owes the editor, who foolishly had advanced him some money. At lunch his long-suffering girlfriend Lindy (Abbie Cornish) has just returned him the keys to his flat, when a few minutes later he runs into Vern, the brother of the woman to whom he had been married for a brief time. For some reason, Vern invites him for a beer and offers him NZT, a pill that he claims will allow him to access the 95 percent of his brain that is never used. Once a drug dealer, Vern now allegedly works for a pharmaceutical company that is testing the drug.

Eddie says "No," but Vern leaves it with him anyway along with his card, and of course, the desperate Eddie soon is taking it and feeling transformed as inside his brain we see synapses firing. Seeming to be four persons, Eddy cleans up his messy room and finishes the first section of his novel. The pill's effects last but a day, so Eddies calls on Vern, only to find the poor guy has been brutally murdered and his apartment trashed. Eddie calls the police, but also searches for the cache of pills that he thinks the killers have not found. Bingo, there they are in a clever hiding place. Soon he is taking one a day, succeeding in finishing his novel, winning big at a gambling casino, and also in the stock market. He draws the attention of a big time broker and soon is wowing him and his associates as he continues to combine everything he has ever seen or read with what he can now take in so rapidly that he reaches a decision that is always on the mark. He has also won back Lindy.

So, what more could a man want, whose book is acclaimed the work of a genius and bound for the NY Times' Best Seller List, and who has added thousands upon thousands of dollars to his bank account? In Eddie's case more, plenty more. He wants to make not millions on the stock market, but billions. This would take a long time if he did it the old fashioned way by investing just his own profits from his trading, so he finds a loan shark from whom he borrows half a million dollars. Now this soon leaves us wondering just how smart Eddie really is, for the shark not only looks mean, but he has a Russian accent. (Maybe Eddie never saw any of the thrillers of the past few years in which greedy Russian gangsters kill in such ruthless ways.)

Two other wrinkles in Eddie's life. First, he now has periods between pills in which he cannot remember everything that he did. The woman whom he had picked up and had casual sex with in a hotel room. She has been found murdered. Did he do it? Second, his stock broker friend has set him up with the country's richest businessman Carl Van Loon (Robert de Niro). Unfortunately this comes at a time when Eddie is running out of pills, so although he initially impresses the shrewd billionaire with his analysis of a potential merger deal, at other meetings Eddie can barely function, his health so deteriorated that he walks with a limp.

And there is that menacing Russian who wants to obtain Eddie's pill supply. It is not just Eddie who is in danger.

The loan shark and another man stalking Eddie become a danger to Lindy in one exciting chase scene through Central Park involving her, with the answer to her rescue enveloping her in Eddie's scheme deeper than she wants to go.

Just when it looks like this will follow in the path of the usual cautionary tale, the film switches (I might say "jumps") tracks, and . . . well see for yourself, as this is a very entertaining film, even though it is disappointing at the end.