The Men in the Gray Flannel Soutanes 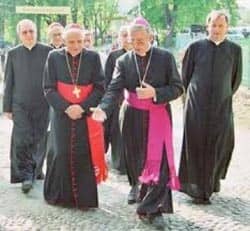 Tradition has it that a Congregationalist minister named Mather Byles, Sr., observing the raucous funeral procession for a Boston Massacre victim, asked, "Which is better—to be ruled by one tyrant three thousand miles away, or by three thousand tyrants not a mile away?"

Byles' words haunt me in any debate on the subject of clericalism. Russell Shaw, writing in the wake of the sex abuse scandal, defines the term thus:

I mean an elitist mindset, together with structures and patterns of behavior corresponding to it, which takes it for granted that clerics—in the Catholic context, mainly bishops and priests—are intrinsically superior to the other members of the Church and deserve automatic deference.

As mindsets go, that one's no keeper. If ever that needed proving, the self-interested response of bishops worldwide to the presence of abusive priests proved it. To be sure, there are thorough, very intriguing new models for Church governance. In The Liberation of the Laity, Paul Lakeland proposes a Church where lay and priestly ministries are equal, theologically speaking; where women and married men may enter the ministerial priesthood; and where bishops are elected. He does not, however, recommend abolishing the papacy, or putting questions of faith and morals to a popular vote.

Still, any program that would throw open the halls of power to anyone who might want in, should scare thinking people out of their wits. Though no great fan of religion, H.L. Mencken put his finger on just what makes the Church's limited-access policy so attractive. "The Catholic Church," he writes in American Credo, "is . . . controlled by a class of men who are largely above popular passion, and intelligent enough to see beyond the immediate advantage."

Mencken does sound a bit of a sentimental fool here. As we've seen, members of the Church hierarchy think plenty about their immediate advantage. But if this sad fact has become especially apparent recently, it's because circumstances have made bishops more vulnerable to popular passion than ever before. The late Fr. Richard John Neuhaus chastised ranking churchmen for insincere displays of remorse, including high-profile "listening sessions" with victims and "teary-eyed " photo ops. A bittersweet observation, that. If a public figure assumes an attitude of CYA, it's a sure sign he is now, in some way, accountable. The most unctuous mob-mollifier of them all, "I feel your pain," was made into a punch line by an elected official.

Now, some would say the bishops just haven't gone far enough. Catholics deserve real responsiveness, not just a show. And here begins the problem. There are many voices out there to respond to—some of them very demanding. Consider Deal Hudson, who is both president of the pro-life group Catholic Advocate, and director of the online magazine InsideCatholic.com. Throughout early 2010, Hudson published editorials challenging the Bishops' Conference to withdraw from the Leadership Conference of Civil and Human Rights. The LCCH, a coalition of 200 groups, including American Association of People with Disabilities and the American Council of the Blind, supports abortion and same-sex marriage. When it endorsed pro-choice Supreme Court candidate Elena Kagan, the Bishops' Conference did indeed withdraw.

Was this a caving-in to public pressure? A case of the dog suffering its tail to wag it? Probably not; but Hudson might be pleased if it were. He has urged the faithful to overcome their "inbred sense of deference to authority" and form a "Catholic Tea Party." The goal: pressuring the bishops into rewriting their "Faithful Citizenship" guide in such a way that would make it impossible for Catholics to vote for pro-choice candidates.

Brash and partisan though Hudson might seem, he's a shrinking violet, not to mention a moderate, compared to Michael Voris. Voris, founder of St. Michael's Media, promotes an ecclesial and political vision that manages to combine the worst of Mao Zedong and the worst of Francisco Franco. He has called for "a new crusade" against "the enemies of Christ who have embedded themselves in the Church." He has also touted a "benevolent dictatorship"—one run, of course, by a Catholic. Democracy, he predicts, "is a system that will end in self-destruction."