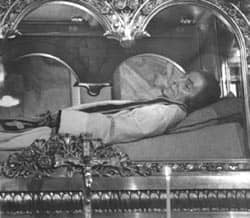 The truism about beauty residing in the eye of the beholder is especially true when the object beheld is the mysteriously intact body of a long-dead saint. Here, a member of the Society of St. Pius X reflects on the remains of 13th-century Franciscan penitent Margaret of Cortona, which are on display in the saint's hometown cathedral:

The skin, of a greyish colour like the parchment covering of a book, is tightly drawn over the bones of the face. The sockets of the eyes are deeply sunk—the eyelashes wanting, the lips compressed. The whole aspect is that of peace, and the pilgrim feels as if he could gaze for long hours on this countenance which so rivets his attention.

In an article titled "Molto Signora: Or, How I Read Winckelmann Under the Tuscan Sun," an apparent skeptic who calls herself Fleur Ladoleur offers a contrasting account:

[St. Margaret] was mummified, indeed, but without the wrappings of the Egyptian mummies of museums. She looked like petrified wood, small and curled up, an oblong shape, brown, with pieces of brown rags covering her.

Ladoleur concludes: "I was amazed and sickened at the same time . . . between the agony of the Stations of the Cross and the absurdity of carbonized remains of a woman placed before a town's eyes."

So one person's miracle is another's mummy—no duh, right? Well, it turns out that neither observer has the story exactly right. In the 1980s, during a Vatican investigation into questionable relics, pathologists discovered suture marks on St. Margaret's thighs, chest and abdomen. They concluded that her body had been infused with unguents.

Researchers subsequently learned that the people of Cortona, upon their local mystic's death, had openly petitioned their bishop to embalm her. The petition later disappeared into the archives. In the eighteenth century, when Vatican officials re-examined Margaret's body in preparation for her elevation to the altars, they took only the most cursory look under her burial garments. In plain English, they couldn't stand to see her naked. If anything, St. Margaret's body represents the triumph of medieval embalming technique and civic pride. Its miraculous reputation resulted from the coincidence of slipshod record-keeping and chivalry.

St. Margaret's case is probably exceptional. Church tradition abounds with stories of saints whose bodies remained more or less intact, unaided, through time and the most shocking abuse. Joan Carroll Cruz's The Incorruptibles: A Study of the Incorruption of the Bodies of Various Catholic Saints and Beati, reviews over 100 of them but makes no claim to exhaustiveness. Still, it seems fortunate that incorruption as a sign of sanctity is neither doctrine nor dogma. As Cruz dutifully notes, few of these venerable bodies quite match the rapturous descriptions made by the original examiners.

To choose one at random, consider St. Theresa Margaret of the Sacred Heart, an eighteenth-century Florentine Carmelite nun. Witnesses report that decomposition proceeded rapidly after her death, but then—just before she was scheduled for burial—reversed itself. According to hagiographer Monsignor James S. Newcomb, her eyelids became "dewy," her lips "naturally red," and her limbs "pliable." Florence's archbishop, having arrived to see the sight for himself, was overwhelmed by a "sweet odor," which he proclaimed "the fragrance of virginity."

Today, Cruz reports, Sister Teresa Margaret's body is "dark and dry." A less generous description might say, "mummified"—remarkable enough to a scientist, but unlikely cause for tears of joy, as the hagiography has it.

Now, it's possible that Msgr. Newcomb's account is basically accurate. The body's current desiccation could be the inevitable result of prolonged exposure to oxygen, and perfectly compatible with its initial inspiring appearance. But just as likely a certain hyperbole inflated eyewitness accounts. If pious wishful thinking can transform St. Margaret's rag-draped corpse into a riveting object of contemplation for a schismatic pilgrim, it could have had the same effect on members of St. Teresa Margaret's community.

If that sounds unfairly cynical, consider the case of St. Clare. Her bones, when first exhumed, were found completely bare of flesh. At some later point, members of her order commissioned craftsmen to fashion a corpus sanctum, or body-shaped reliquary, out of silver. The bones, bound together by cloth, pitch and silver wire, were placed inside; in the manner of ancient Egyptian sarcophagi, the outside was painted to resemble a human body wearing a nun's habit.