Palm Sunday: Looking at Jesus and Mary and Ourselves 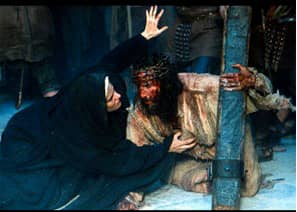 When I was a very small girl, my grandparents had a set of oil paintings on either side of their bed. As I walked down the hallway, I would see them, and they frankly frightened me and made me want to avert my eyes. One was of Jesus in a close-up view carrying His cross, and the other one was of Mary looking up at her suffering child hanging there, and helpless to do anything except offer her loving presence and tears.

In the painting of Jesus, His face was full of such pain and the effort to carry His heavy cross, but at the same time, His expression was resolute. You could see the blood from the thorns, and bruises on His face.

In Mary's face was the anguish of a mother with her lips slightly apart, and her eyes seemed to be wet from crying. I don't know who this talented artist was, but he or she had a way of making these paintings appear three-dimensional. The tears running down Mary's face and the blood dripping from the Christ's wounds made it seem as though if you touched the painting, your finger would come away wet.

Being a child, these paintings both frightened and attracted me at the same time. I would go into their room to stare up at them, and to wonder at the sorrow of the Lord, and His dear mother. Now as an adult, I realize how hauntingly beautiful these images were, and I still wonder at Christ's unfathomable love and mercy for me.

All Lent we have been preparing for this Holy week which will bring us to the glorious celebration of Resurrection Sunday, but we have to go through Good Friday first. The events of Holy week are about the story of Christ's humility and awesome love for us. On Passion Sunday, most Christian churches distribute palms to recall His entry into Jerusalem with the people shouting hosanna. They had witnessed Jesus performing miracles, and heard Him preach. Now they wanted the Lord to be a conquering hero marching into the city. However, Jesus didn't come in on the back of a stallion, or ride in on a chariot—he came humbly on the back of a donkey. This was to fulfill the prophecy in Zechariah (9:9). This was also the day the male unblemished lambs were chosen for the Passover sacrifice (Ex. 12:3-6).

In less than a week, this cheering crowd would cry out "crucify Him," and His followers would all scatter. Judas would betray Him for the price of a slave—30 pieces of silver—and Peter would deny Him three times. Of the apostles, only John would stay with Mary, at the foot of the cross.

He was the Son of the Father—the King of Kings, and Lord of Lords—but He made Himself a servant. Jesus came into the world under the humblest of conditions in a stable in Bethlehem, which means House of Bread—laid on a bed of straw—the food for the sheep. He is the "Lamb of God," giving us His own body as our food, and blood as our drink. At the Last Supper He broke the bread, and lifted the cup saying, do this in memory of me.

He died naked, beaten, nailed to a cross, struggling for each breath, punished as a criminal. We tend to sanitize the horrible events of that Good Friday, and not really look at the extreme suffering our Lord underwent for all mankind, because it is too horrible to imagine. The Lord knew full well what He was about to face, for the Romans regularly crucified those who threatened them. It was only out of a concession to the Jews that they even took down the body, because of the feast of Passover. Usually the corpses were left to decay as a deterrent for others.

Throughout Lent I have tried to meditate on all of this, looking at my own life in my response to His love, asking myself when I have been one of the crowd cheering when things seem like they are going well, but betraying or denying Him when they aren't.

Do I have the courage to stand at the foot of the cross with His mother, attempting to offer whatever comfort I can with my examination of my own conscience, as I force myself not to avert my eyes from what He sacrificed for me?

And yet, we have the assurance of His love, even in our unworthiness. He prayed from the cross for those who were there and for us today: "Father, forgive them for they know not what they are doing."