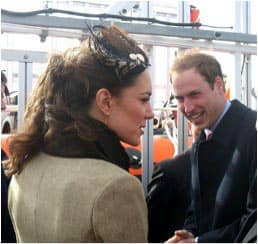 Just before the riotous May Day weekend celebrations take place around the world, William Arthur Philip Louis Windsor will marry Catherine Elizabeth Middleton in Westminster Abbey with the blessing of the Archbishop of Canterbury. As fashionistas, tabloids, and "Royal Watchers" gush about this being a fairytale wedding, I am considering its mythic proportions.

The First of May is Beltaine, the celebration of the marriage of the earth itself. In sacred symbolism and mythos the King is identified with the sun, who in order for his reign to be fruitful must marry the land itself, which is seen as a Goddess in her own right. It is in May the earth thrives under the caresses of the sun, when the greenness of the earth reaches toward the sun as toward a lover. There is no timidity in the abundant verdancy of May. In the Pagan Wheel of the Year both God and Goddess are mature, confident, and aware of the danger when they marry at Beltaine. For a King to marry the May-bright land is no half-hearted gesture. The King that spends an early summer evening with the May Queen is the same King who is sacrificed for the land when his harvest time has come.

In England, this mythos of sacred marriage is a very old one (and still popular today). The legendary Arthur was a sacred king who ruled brightly in the May of his youth, accepting the gifts and protection of the land itself until he was cut down and stored away like winter wheat. In Prince Charles we see this pattern emerge again: he married a woman who became representative of the land itself, experienced a rather public sacrifice of sorts and now resembles nothing so much as a Winter King whose Gráinne has returned to him. As he fades back into the elder pillars of the family, William is the bright new prince taking on the role of the sacred king.

The timing of the Royal Wedding and the way the old mythos fits is important to how England herself is perceived. The growing Pagan movement in the UK, particularly the strides made by Druids to gain recognition, has resulted in a perspective of re-enchanting the land. Spirit of Albion has received a surprising amount of support in the debate over whether Britain should have a national anthem, and the traditional English May Day activities have been taken up with renewed vigor as Pagans enthusiastically use Maypoles, Morris Dancers, Hobby Horses, and traditional music to celebrate what is one of the "holiest" days of the year. "Merry Olde England" is actively reclaiming her heritage: religiously and musically.

William's marriage is of huge symbolic importance to England, and his "May Queen" will be carefully scrutinized. Queen Elizabeth was raised to represent the heart and soul of the land; Diana Spencer had to learn that, and Kate Middleton is now charged with the same task of becoming. Kate, being a commoner, represents that bridge between royalty and land itself. She will have to rise to the occasion just as William will have to make the monarchy more relevant to modern Britain, playing out the symbolism of the earth and sun bending toward each other. Kate, now a maiden-like May Queen, will mature into a Mother of the Land. She will have to bear heirs, to take up duties and causes for her country, and be a living symbol of a fruitful England in all of her activities. She is taking upon herself a mantle of mythic proportions and intense pressure.

Yet the couple seems up to the challenges they face. They're confident and mature, even impressing the Archbishop of Canterbury:

I've been very struck by the way in which William and Catherine have approached this great event. They've thought through what they want for themselves, but also what they want to say. They've had a very simple, very direct picture of what really matters about this event. I think that they have a clear sense of what they believe they're responsible to. They're responsible to the whole society; responsible to God for their relationship. And I think it's impressive that they've had that simplicity about it, they've known what matters, what's at the heart of all this . . . because I think they are deeply unpretentious people.