A Sad Day in France 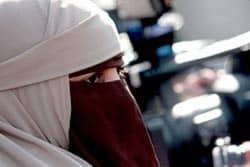 It was nearly eight months ago that France officially banned the total veil, or "voile integrale" in all public places. The law, which forbids any veil that covers the face and does not exclude visitors, went into effect on April 11 with at least two women arrested on its first day as a law.

The uproar over the face veil, or niqab, has raged for months, placing people on two sides of the issue. For some the niqab is a sign of subservience that goes against French values of equality and poses safety issues; for others, banning a form of dress goes against the very concept of the freedom to practice religion and the freedom to dress as one chooses in a democratic nation.

The problem with the Islamic religious argument is this: Although most Muslims and Muslim scholars accept the hijab, or headscarf, as well as covering the body (outside of hands and feet) as required for Muslim women (and supported by various Islamic texts), the covering of the face by a veil is less emphasized by scholars. (For a breakdown of the different types of Muslim dress, see here.) Different interpretations of the Islamic text will reveal varying opinions on the niqab. The larger consensus is that it is probably not required. Added to that is the fact that while performing the Hajj pilgrimage, women must not cover their faces.

So why do some Muslim women choose to wear the niqab? There is no single answer. For some it may be imposed upon them by their families or it may be the norm of the society in which they reside. For others it's about feeling protected, about maintaining their modesty, or about emulating what the women did during the Prophet Muhammad's (SAW) time. The list of reasons is long and personal, and more often than not, it is a choice that a woman makes—just like when I chose to wear a hijab six years ago.

But whether it is religiously mandated or not, for me the problem with banning the niqab comes down to one simple thing: In a democratic society, how can a government dictate what one can or cannot wear?

When the French Senate voted for the ban on the face veil, President Nicolas Sarkozy declared that the burqa (and there's his first mistake—the burqa is the robe that Muslim women wear over their clothes and can include the face veil, but the face veil itself is the niqab; so calling this a burqa ban is inaccurate) was demeaning and isolating. "In our country, we cannot accept that women be prisoners behind a screen, cut off from all social life, deprived of all identity." He went on to say the face veil is a sign of "debasement" and will not be welcome on the territory of the French Republic.

Why is covering up a sign of debasement, but uncovering one's body is not? A woman who wears something sleeveless, or shows her legs, or wears something that accentuates her curves is making a choice, right? Is she debasing herself by doing so? It depends on who you ask. For Sarkozy and many French citizens and others around the world, wearing the niqab and burqa is a signal that the woman who is covered up is a prisoner with no identity. (How Muslims are being systematically scapegoated in France and in other countries is a huge topic for another time.) But how can a democratic government decide what type of dress is wrong and right?

Today a niqabgoes against the French republic. Tomorrow the headscarf will be seen as a sign of subservience. Then women who choose to wear loose clothes that cover their whole body will be ridiculed and told they are cutting themselves off from all social life. Does this sound absurd? It should.

In my opinion, I do think it is easier to speak and interact with someone if you can see her face. Trust can be built faster if you can gauge the look on someone's face, if you can see her smile, if you can build that connection. But to say that a woman who chooses to wear a niqab is a prisoner, has no identity, to say that she has no right to wear it, that you will fine her or jail her or make her remove her veil if she wears it, that goes against the very principles of a democratic society where free will is paramount.

If you listen to what French citizen Kenza Drider (a Muslim convert who wears a burqa and niqab) has to say, taking away a woman's choice as to what she wants to wear, whether it is something that covers her totally or something that exposes her, goes beyond violating a person's right to practice religion. "This whole law makes France look ridiculous," she said in an article that recently appeared in The Observer.

"I never thought I'd see the day when France, my France, the country I was born in and I love, the country of liberté, égalité, fraternité, would do something that so obviously violates people's freedom."