Scandal of Evil: No Match for the Cross of Christ 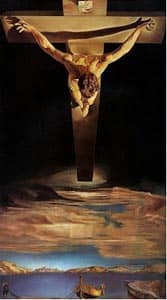 Jesus is the answer. Period. Intuitively, I know that now. I did not always. We might know that intellectually, yet we may still wrestle with that knowledge in our heart.

We've all been victims of pain, hurts, other people's sins, and our own. And yes, we are victims of evil.

The Catechism of the Catholic Church calls it "the scandal of evil" since it derails the providence of God that we are meant to know. In fact, the Catechism boldly states:

There is not a single aspect of the Christian message that is not in part an answer to the question of evil. (Catechism of the Catholic Church, par 309)

A few passages in the Catechism bring me great comfort in regard to evil and the reality of the devil in our world. (Oh, by the way, the Catechism reminds us that the devil exists too. Though his marketing campaign would have us believe otherwise.)

So why don't we start with the devil? Besides the familiar Genesis account of the fall of Adam and Eve, there was also the fall of the angels:

Behind the disobedient choice of our first parents lurks a seductive voice, opposed to God, which makes them fall into death out of envy. Scripture and the Church's Tradition see in this being a fallen angel, called "Satan" or the "devil." The Church teaches that Satan was at first a good angel, made by God: The devil and the other demons were indeed created naturally good by God, but they became evil by their own doing. (Catechism of the Catholic Church, par. 391)

Seems that the devil succeeded in tempting Adam and Eve with the very lie that he believed—that he could be "like God." (See Gen. 3:5.) And it is a lie that many people today still attribute to the devil. They think he is like God.

Sometime people get confused regarding the devil's power. (As I said, his PR campaign is often very successful.) As if the devil was the equal of God, or an opposing force of equal power. As if "God is good" is of equal value to the "devil is evil." That would be incorrect.

The power of Satan is, nonetheless, not infinite. He is only a creature, powerful from the fact that he is pure spirit, but still a creature. He cannot prevent the building up of God's reign.

Although Satan may act in the world out of hatred for God and his kingdom in Christ Jesus, and although his action may cause grave injuries—of a spiritual nature and, indirectly, even of a physical nature—to each man and to society, the action is permitted by divine providence which with strength and gentleness guides human and cosmic history. It is a great mystery that providence should permit diabolical activity, but "we know that in everything God works for good with those who love him. [Rom 8:28.]" (Catechism of the Catholic Church, par. 395, emphases mine)

So there it is. Satan exists. And God permits evil. And that's what scandalizes us. And if that were all we read in that passage we would be mistaken.

Satan's power is not infinite. His power is only as strong as his creature-liness. Satan is not the Creator. (And it has really been ticking him off.) You simply cannot compare a finite creature, even if it is a powerful spirit, with the infinite omniscient omnipotent Almighty God.

No matter what evil comes our way, we must understand that evil only exists in the realm of creatures. It has no existence in God's reign. There's no denying the devil can have influence in this world, but, truly, the devil's powers have limits.

And so, we see that the action of God versus devil from the beginning was not a very fair fight. God will overcome. We have the constant assurance and witness of the saints that have gone before us.

St. Catherine of Siena has words for those who are scandalized and rebel against what happens to them: "Everything comes from love, all is ordained for the salvation of man, God does nothing without this in mind."

St. Thomas More, prior to his martyrdom: "Nothing can come but that that God wills. And I make me sure that whatsoever that be, seem it never so bad in sight, it shall indeed be the best."

Okay, so maybe you and I are not quite yet the saints we are called to be. We still may be wrestling with the question of evil, and our sins as a result of it. This truly is a battle that we are in, and Lent often brings the battle to our minds more intensely.