"Sinners: Jesus and His Earliest Followers": A Book Excerpt

This month in the Patheos Book Club, we're exploring the new book Sinners, by Greg Carey. The following is an excerpt of Chapter 1. (Read a Q&A with author Carey here.) 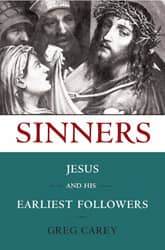 The woman walks into the room, but we do not know her. Immediately we hear that she is a "sinner." She walks over behind Jesus, who is reclining beside the table, opens an expensive jar, and bathes his feet with her tears and her hair. Then she kisses his feet, anointing them with ointment (Luke 7:36-50).

But she is a sinner. This identity is the third thing we learn about her: she is a woman; she is from the city; and she is a sinner. The host of the dinner, Simon, will not say it aloud, but he, too, knows she is a sinner. Jesus divines Simon's thoughts, and he scolds his host, but he does not correct Simon's appraisal of the woman's identity, not at all. Instead, Jesus agrees that her sins are many. Case closed. This woman is a sinner.

Luke's story leaves us with an information gap. How do we know she is a sinner? How do the narrator, Simon, and Jesus possess this information? What leads them to this shared assessment? What has she done?

These questions recall a famous scene from the film Monty Python and the Holy Grail. Sir Bedevere arrives in a village where he encounters a mob. The residents confront him with a defendant and an accusation:

An inquiry is in order. Wise Bedevere will not go for just any lynch mob accusation:

How do you know she is a witch?

This line of questioning elicits multiple responses. The woman looks like a witch, but then again that is because her neighbors have dressed her up for the role, including placing a carrot over her nose.

The villagers bring more evidence. Apparently the woman has also transformed a poor villager into a newt. He looks fine now, of course. Reluctantly, he confesses:

How fortunate! Unfortunately for the alleged witch, the evidence against her mounts. Because witches are made of wood, because wood floats, and because ducks also float, witches and ducks must weigh the same. It makes sense to weigh the woman against a duck, right? Amazingly, on the scales the woman and duck balance one another. The mob shouts the verdict:

A hilarious scene, but it raises serious questions. Witchcraft accusations have led to the deaths of quite a few persons. Looking at the trial records, modern historians have wondered how such charges emerged -- not to mention how they were substantiated. What kind of person is liable to be called a witch? What does one have to do? How do societies apply the label witch to someone?

It happened in New England. Historians have reconstructed some of the social processes by which people recognized women, and some men, as witches. Carol F. Karlsen notes that the New England witch trials reflected "an ideology of womanhood" that supported the kind of society Puritans were trying to create.[1] "Accusers denounced witches for behaviors and emotions that were widespread among the colonists, not least of all among the accusers themselves."[2] If the accusations were mundane, then how were prospective witches selected as defendants? Women who deviated or challenged the norms of feminine behavior were far more likely to face witchcraft charges. Naturally, as witchcraft trials grew more common, New England women grew cautious. Many began stifling their outspoken criticisms of the religious and political leadership.[3] Thus, witchcraft allegations performed a social function by protecting the social and religious order at that time.

Research in sociology and cultural anthropology illuminates our understanding of witchcraft accusations. Witchcraft reveals other dimensions of communal life such as family organization, social structure, and individual psychology.[4] For example, in New England many witchcraft cases pitted adolescent girls as accusers against middle-aged women defendants. This pattern likely reflects tensions between younger and older women, possibly as a result of the parenting customs of the day and the relations between older and younger women.[5] Moreover, most accused witches already had records or reputations of antisocial or criminal behavior.[6] Once again, there are ties between labeling individuals as "witches" and methods of social control. As James M. Morone puts it, "The witchcraft frenzy came, in part, from an urge to force secular problems into a moral frame." The New Englanders tried to "pin social tensions on hidden, immoral victims."[7]