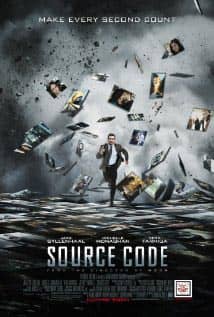 At a crucial moment in the film Source Code, hero Colter Stevens poses the question: "What would you do if you knew you had only one minute to live?" The answer turns out to be the pivotal point of this not-quite-time-travel science fiction thriller starring Jake Gyllenhaal.

Stevens is an army pilot who wakes up one day to find himself in the body of another man riding on a commuter train headed to downtown Chicago. Before he has enough time to figure what going on, the train explodes and Stevens wakes up again, this time inside some sort of isolation chamber, the apparent subject of an army training experiment. Stevens is part of an effort named "Source Code," a mysterious new technology that allows the military to place a soldier's consciousness into that of a recently-deceased person and relive the last eight minutes of that individual's life over and over again. Stevens' mission is to continually return to that train, inhabit the victim's body for eight minutes, and try to discover the terrorist who triggered the bomb.

Does any of this make sense? Not really, and the explanation for how the source code technology works isn't really the point of the film. The real intrigue comes from this idea that one might be able to live an experience over and over again until some wrong can be put right. Watching the film is something like playing a video game and pushing the reset button every time you mess up until you master the level and get to move on to the next.

Will teens connect with this film, beyond the explosions, fistfights, and somewhat surprising twist ending (surprising, at any rate, to those who haven't seen too many "Twilight Zone" episodes)? Will they notice the deeper questions inhabiting this seemingly simple plot? It's hard to say, but the questions are there, particularly in the film's meditation on what it means to get a "do over" in life.

Gyllenhaal's character not only seeks to right the wrong posed by the terrorist plot, but he also has some unfinished business in his relationship with his father. The source code experiment gives him time to bring some healing to this relationship and find a measure of peace. I couldn't help but think how all this speaks to the notion of grace, particularly as it relates to young people who are continually making mistakes, messing up relationships, posting Facebook status updates they later regret, shouting words at parents they wish they could take back, experimenting with drugs, alcohol and sex. Adolescence is a time for making mistakes as teens grow and mature, but where will they hear a word about God's unconditional grace, about God's ever-present love that allows us the chance for a "do-over" even for our worst mistakes, our worst sins?

Of course, I'm not equating God's grace with a reset button on a video game. Getting beyond our sin to accept God's offer of a "do-over" is often hard, uncomfortable, scary work. In the film, Stevens has to face the reality that in order to uncover the terrorist, he must be willing to return to that train over and over, each time experiencing the horrific explosion and his own virtual death. If he's not willing to do this, his controllers tell him, more people will be lost. To get to new life he has to be willing to walk through the valley of death. Or as one character puts it in the film, "The world is going to hell. But there's hope in the rubble. But first there has to be rubble."

Source Code, for all its sci-fi silliness, offers a chance for conversation around important Lenten themes of sin, repentance, grace, and the journey of faith. Its story of new life from death can even carry us into the Easter season, where we are offered another chance at following Christ, of putting God's love at the center of all we are so that when we ask that question—"What would you do if you knew you had only one minute to live?"—we might answer just as it is in the film: "Make every minute count."