Why Sinners? An Interview with Author Greg Carey 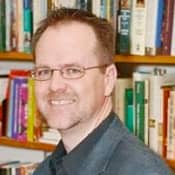 This month in the Patheos Book Club, we're exploring the new bookSinners: Jesus and His Earliest Followersby New Testament Professor Greg Carey. In this new interview, Carey speaks about why he chose the topic of sinners, whether Jesus was a sinner, and how such an understanding might impact our contemporary experience of Christianity.

Sinners has two dimensions. First, it explores a basic problem in New Testament studies: How did the earliest Christians understand themselves? Second, so what? When the early Christians told stories about Jesus and when they communicated among themselves, they recognized that their values and practices led to tension with their neighbors. It helped them to remember that Jesus was criticized for his companionship with sinners and for failing to live up to conventional expectations, that he was executed for his faithful pursuit of God's ways.

That message, that the early Christians understood Jesus and themselves as "sinners," has largely been lost in North American Christianity. In their recent book, American Grace, Robert Putnam and David Campbell have shown how nostalgia for the respectable Christianity of the 1950s leaves people cold today. Followers of Jesus need to rediscover a more ancient heritage, in which following Jesus will stir up a little dirt.

In the context of your book, what does it mean to be a sinner?

Luke 7 mentions "a certain woman in the city, a sinner" who washes Jesus' feet with her tears. When I'm talking about the Bible, "sinner" embraces people like this woman, whose sins "are many." This includes people who habitually live outside the law of Israel as well as a host of other "deviant" groups. For example, the Gospels sometimes link sinners with tax collectors and prostitutes.

While we may use different language today, all societies find ways to label people who fail to live up to its standards. One hundred years ago, professional athletes and entertainers were stigmatized as sinners. But things change. Now we have concerted attacks against immigrants, single parents, sexual minorities, and Muslims. The names change, but the basic reality of stigmatization and exclusion remains a constant.

Was Jesus a "sinner"?

The early Christians certainly remembered Jesus as a sinner—in the sense that Jesus aroused disapproval from the righteous, and in the sense that his execution amounted to what Paul called a "scandal" (1 Cor. 1:23; Gal. 5:11). While they insisted upon Jesus' faithfulness, they also related how Jesus kept disreputable company and he led his followers away from conventional responsibilities to household and society. The early Christians struggled with this legacy, negotiating the tension between living respectable lives among their neighbors and celebrating their own counter-cultural values.

How did early Christians struggle with self-identification after Jesus' death on the cross?

Early Christian preachers faced the great task of interpreting the crucifixion as resulting from Jesus' faithfulness rather than as a shameful defeat, what Paul calls "the scandal of the cross." The resurrection message certainly aided that task, but things did not stop there. Contrary to conventional values, Paul argues that God's power is demonstrated in "weak" and "foolish" things rather than in conventional power. He also maintains that the crucifixion and resurrection establishes a mystical bond between Christ and his followers, so that the crucifixion empowers believers to transcend sin and death. Revelation uses the cross to reinterpret divine power: where folks hope for the Lion of Judah, God rules through the Lamb that was slain (5:1-13).

In what ways does your understanding of Jesus' life and death impact the Christian's Easter experience?

I've never been able to make sense of Jesus' death as paying some sort of penalty for human sin. Instead, I see what Paul calls "the faithfulness of Christ," as Jesus lives out his vision to the point of confronting the religious and political powers of his day. I do have a high Christology. I believe that Jesus' death resulted from his faithful life, and I believe that in Jesus' death God has taken the fullness of human suffering and cruelty into God's own being. The resurrection, then, demonstrates God's blessing of Jesus' way and God's power over the forces of death. Our Lenten and Easter journey invites us to experience this reality in a way that is honest, self-critical, and hopeful.