Blasting American liberalism and praising America's founders is, for McNaughton, as much a form of religious conviction as it is political persuasion. This explains his shock at BYU's decision that One Nation Under God was too political for their religious-themed art section; for McNaughton, the two are one and the same.

The Function of Art
It is a common adage that art doesn't interpret itself. So Jon McNaughton makes sure to interpret his art for you. On his website, he provides more than just background commentary for his four featured paintings; he gives an interpretive commentary for every individual found in the work. This approach marks a distinct element of his artwork: the message is not only more important than the image, but the image is merely a vehicle to present the message. These descriptions offer both a defense for the inclusion of certain figures as well as the furthering of a specific agenda. 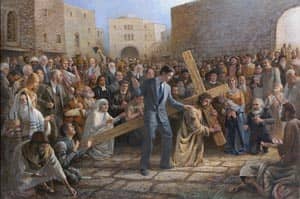 Consider, for example, McNaughton's Via Dolorosa. In this work, McNaughton depicts Christ's journey to Calvary while carrying his cross. ("Via Dolorosa" is Latin for "Way of Suffering" and is the name of a path traditionally believed to be the road Christ followed to his death.) The entire painting is framed around the notion of "suffering"—Christians are the "most persecuted people in the entire world," McNaughton claims, and he portrays over a hundred figures who he believes played either a positive or detrimental role in the history of Christianity.

The painting is a "who's who" of the previous two millennia, and it provides a chance for McNaughton to try his hand at more historical figures as well as to pronounce sweeping claims in support of his "good versus evil" narrative. When one scrolls over Charles Darwin, the pop-up proclaims that "Darwinism has had a devastating impact on Christianity"; with Marx, the pop-up reads that "Communism is the great antagonist of Christianity"; on Obama, the pop-up quotes the President saying, "Individual salvation depends on collective salvation," a belief McNaughton finds appalling because, similar to his critique of socialism, it takes responsibility away from the individual and thus degrades Christianity. As in One Nation Under God and The Forgotten Man, these historical figures play the role of stagnant pawns in a cosmic game of political chess.

This is where McNaughton's notion of "art" becomes fuzzy. His most popular works—including the four paintings showcased on his website—are not designed to be cherished for their aesthetics; indeed, most of the people included in the portraits—and recognizable individuals are always the center of attention in these paintings—are primarily repetitions of stock images and add no novel interpretation to the thousands of previous depictions.

Art is merely a tool for McNaughton to put forward his political agenda and spread his ideology. Perhaps this is why McNaughton's work is more appropriate at a Tea Party rally than the art section of BYU's bookstore. For, though Mormon art has long been problematic in translating profound religious concepts into kitsch, where deep symbolism and encouraged introspection are disregarded in favor of superficial images depicting the most basic of narratives, the political nature of Mormon conservatism has rarely infringed so overtly on sacred space. McNaughton's use of art may indeed stem from his Mormon tradition, but he has demonstrably taken it a step too far for BYU's taste in mixing the sacred and the profane.

The Use of History
It takes only a quick glance at McNaughton's work to see what an important role history plays in his political and religious mindset. Of course, referencing historical figures is nothing new, especially in America, where the Founding Fathers are regarded as the beginning and the end for all political discussion. America has a founding moment—the Revolution and its Declaration of Independence, and governmental reform with the Constitution—that many regard as pure; all the nation needs to return to greatness, this reasoning implies, is to rekindle those original flames through historical knowledge. McNaughton follows this tradition.

But depictions of history have always revealed as much about the present as they do about the past, a fact that many proponents of historical fundamentalism often forget. "Historical fundamentalism," historian Jill Lepore wrote in her recent The Whites of Their Eyes: The Tea Party's Revolution and the Battle over American History, "is marked by a particular belief that a particular and quite narrowly defined past," and its corresponding historical documents, "are to be read in the same spirit with which religious fundamentalists read, for instance the Ten Commandments" (16). This often leads to simplifications and generalizations in order to match former ideas with present circumstances. It also leaves no room for nuance, since political arguments can only be augmented by a unified past.

Article Continued On Next Page
Page: 2 of 3
5/17/2011 4:00:00 AM
About Kevin Juhasz
Kevin Juhasz is a content manager with a Colorado-based marketing company and the owner of <a href="https://www.thewritecontent.net/about">The Write Content</a>, which provides writing and editing services. He has more than 25 years of writing and editing experience with websites, newspapers, magazines, trade publications and more. Kevin has covered news, sports, entertainment, technology and a wide variety of other subjects.