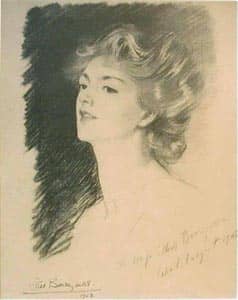 Since the dawn of film, acting families have been part and parcel of the industry. Perhaps none is more distinguished than the Barrymores, known in Hollywood's "golden age" as "the Royal Family." Ethel (1879-1959) was a first lady of stage and film. Millions still watch Lionel (1878-1954) in Frank Capra's It's a Wonderful Life, a movie that topped a long career. John (1882-1942), considered the greatest Hamlet of his time, was the world's top movie star and stage actor in the early 1920s.

Their father was an English actor named Maurice Blythe (1849-1905) who changed his name to Barrymore for the stage. Their mother, Georgiana Drew (1856-1893), was the daughter of a prominent stage family. All three children were baptized Episcopalians. Later, Georgie became interested in Roman Catholicism through the influence of her close friend, the great Polish-born actress Helena Modjeska (1840-1909), a devout Catholic.

Eventually, Georgie decided to take the plunge and become a Catholic too. In a fit of religious enthusiasm, she had Lionel and Ethel do the same (why she left John out is unclear). In Ethel's autobiography, she recalled the event, along with Grandmother Drew's reaction:

Father was infinitely amused by all this, but I'm afraid Mummum was shocked and horrified. Words like 'Papists,' etc., escaped. But when we—Lionel and I—got back . . . she could detect no ghastly difference.

Later, Ethel herself had John baptized a Catholic. Of the three, she would have the closest ties to the Church. In fact, she declared her gratitude to Modjeska "unbounded."

All three Barrymore children went to Catholic schools, with varying results. Ethel became devoted to the Sisters of Notre Dame de Namur, at whose Philadelphia school she boarded. She later wrote in her autobiography:

Before any spiritual or moral lapses I might have considered, I would pause, for somewhere in the distance or maybe by my shoulder like a guardian angel, there was Sister Julia saying, "Really, Ethel. Don't be absurd!"

The boys' experience, however, was quite different. Lionel ran away twice from a Catholic boys' school in the Bronx. Both had an unhappy tenure at Seton Hall Prep in New Jersey. At 13, Jack was sent to Georgetown Prep in Washington, D.C. Ethel commented, "Poor Mummum! All these Catholic schools and now the Jesuits!"

Over the next three years, hopes of reform went unrealized. As a priest guided Jack around campus, there fell from his pocket a razor, a dime novel, and a flask, providing, he recalled, "more information than I could have supplied in eighty confessions." He played tennis and wrote poetry for the school magazine, but was expelled after visiting a bordello. Still, he recalled, the Jesuits "were very kind to me at Georgetown, and although they eventually expelled me, did it in a nice way."

Lionel stood out in this unusually gifted family. He appeared on stage for year before beginning a film career in 1911. But he was also an accomplished artist who kept a studio in his home, and a composer whose works ranged from piano pieces to orchestrals. Divorced from his first wife, he married Irene Fenwick. By then, he more or less ceased to be a practicing Catholic. Yet, after Irene's early death, he never remarried and reputedly never removed his wedding ring.

Ethel's stage took her around the world, and she befriended some of its most eminent citizens, including Winston Churchill (who reputedly proposed). Once while performing in Portland, Maine, she attended morning Mass, where the altar boy was young John Feeney, who later became director John Ford. (They almost worked together on the 1949 social drama Pinky, before Ford withdrew.)

In 1909, Ethel married Russell Colt, heir to a fortune, but it was a stormy marriage. When a divorce seemed inevitable, she consulted her friend, New York's Cardinal Patrick Hayes, who reluctantly supported her decision. An active alumna with her convent school, she sent her own children to Catholic schools.

By his 30s, Jack was at the top of his profession. Known as "the Great Profile," he was considered one of the world's handsomest men. His onscreen transition from Dr. Jekyll to Mr. Hyde (performed without any makeup or special effects) wowed audiences. His 1922 performance of Hamlet is still considered one of the "high water marks of twentieth century Shakespearean interpretation." In his offstage life, it was alcoholism that provided the tragic element.