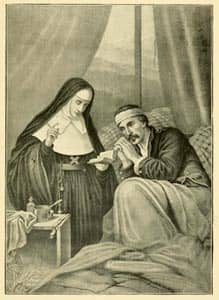 In Washington, D.C., across from St. Matthew's Cathedral (the site of President John F. Kennedy's funeral Mass), a monument stands to the women religious who ministered to wounded and dying soldiers, North and South, during the American Civil War. Unveiled on September 20, 1924, the inscription reads:

They comforted the dying, nursed the wounded, carried hope to the imprisoned, gave in his name a drink of water to the thirsty -

To the memory and in honor of the various orders of Sisters who gave their services as nurses on battlefields and in hospitals during the Civil War.

I am neither a Catholic, nor an advocate of the monastic institutions of that church . . . But I can never forget my experience during the War of the Rebellion . . . Never did I meet these Catholic sisters in hospitals, on transports, or hospital steamers, without observing their devotion, faithfulness, and unobtrusiveness. They gave themselves no airs of superiority or holiness, shirked no duty, sought no easy place, bred no mischiefs. Sick and wounded men watched for their entrance into the wards at morning, and looked a regretful farewell when they departed at night.

This was quite a change. Before the Civil War, nuns often didn't wear habits in public or when traveling, because of anti-Catholic hostility. In Indiana, children threw rocks at them. In New England, anti-Catholic mobs threatened to burn down their convents (and sometimes actually did). And in New York, a man walked up to a Sister in habit, called her a "damned papist bitch," and slapped her face.

But when the war came, they were desperately needed. In general, nursing wasn't considered a respectable profession for women. Nor were there many hospitals; most people were cared for at home. The exceptions here were the Sisters, who operated twenty-eight hospitals nationwide as of 1861. While other churches had women nurses, including the Lutherans and Episcopalians, Catholic nuns constituted the single largest pool of experienced nurses in America on the eve of the Civil War.

Altogether on both sides, over 4,000 women served as nurses; more served as nurses' assistants, cooks, and laundresses. What did the nurses do? They cleaned wounds and bandaged them, helped doctors in surgery, and cleaned the wound. It wasn't easy work, and the turnover rate was high. All in all, it was hard, ugly work.

The turnover rate may have been less for the Sisters. For centuries, historian George Stewart writes, nursing was a "religious ministry rather than a profession." One Sister, asked how she gathered strength to do her work, said: "I thought of the cruel wound in the side of our dear Lord, and my strength was restored." And they asked little remuneration beyond necessities.

They were there on the war's bloodiest battlefields. At Shiloh, where some 25,000 fell, Sister Anthony O' Connell, a Cincinnati-based Sister of Charity, said she was

unable to bear the terrific stench from the bodies on the battlefield. This was bad enough, but what we endured on the field of battle while gathering up the wounded is beyond description . . . Day often dawned on us only to renew the work of the preceding day without a moment's rest.

One soldier said of Sister Anthony:

Amid this sea of blood she performed the most revolting duties for these poor soldiers. She seemed like a ministering angel, and many a young soldier owes his life to her care and charity. Happy was the soldier who, wounded and bleeding, had her near him to whisper words of consolation and courage. She was reverenced by Blue and Gray, Protestant and Catholic alike; and we conferred on her the title of the 'Florence Nightingale of America.' Her name became a household word in every section of the North and South.

When surgeons wanted to amputate a soldier's limb, she would say: "Wait and let me see what I can do for him." And she often saved it. In 1897, she was buried with a full military honor guard.

In some quarters, however, particularly among Protestant nurses, prejudice still lingered. One woman, describing the Sisters' habit, said: "What looking objects to wait upon our sick and dying boys!" Dorothea Dix, the Superintendent of U.S. Army nurses, was said to be particularly hostile to Catholics. Part of the reason for this hostility may have been just plain jealousy.