Clarity and Charity: the Challenge of Blogging While Catholic 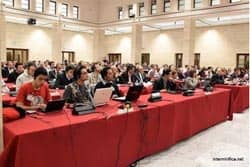 The following remarks were delivered on May 2, 2011, the day after the beatification of Bl. John Paul II, at the Vatican/Bloggers MeetUp in Rome. You can hear non-translated audio of both panels here (where this may be found at about the 31 minute mark) and here. An abundance of blogger assessment of this meeting can be found here.

What immense joy! Today we are in thanksgiving for the beatification of Bl. John Paul II, a pope who had an actor's savvy understanding of media, messaging and the power of an image.

And his holiness was proclaimed by our dear Papa Benedict XVI, who—to the surprise of some—has been very quick to appreciate the transformative effect of social media upon how the world receives and processes information, both for better and worse.

Even as more-mainstream media outlets attempt to downplay blogs and blogging as being a force for nothing much beyond self-promotion, the pope has been ahead of the curve, urging priests, religious and lay folk to embrace social media as a powerful means of evangelization, and a source of Catholic clarity in a very noisy, confused and divided world.

Catholic clarity, of course, cannot be disseminated without a measure of charity, and charity can sometimes be the biggest challenge we face in new media.

The Internet is a place without genuine boundaries. Unlike a magazine, its ideas are not contained between two covers with defined limits; unlike a television or radio broadcast, it is not subject to the constraints of time, or, for that matter, reliant upon sponsorship and underwriters.

Such expansive freedom is both a gift and a terrible temptation to our egos, a force for disorientation and therefore a true battleground for souls.

If I may use an illustrative example, take the scourge of pornography.

This is a temptation of human objectification and imagination that has always existed, but previously a personal indulgence in this area has been necessarily constrained.

Someone who has been lured into the pages of a pornographic magazine may find their imagination ignited in a particular way but only, so to speak, cover-to-cover.

The internet, however, has no endpage; it accesses the infinity of the human mind and then assists in ego-driven distortions, and so a user of pornography, for example, is able to indulge deeper and more perverse imaginings, without ends.

He can even find fellow travelers with whom to chat and establish forums of discussion, where the ego can begin to believe that what is disordered has become normalized.

In a frequently visited echo chamber, the voice of the same eight people can begin to sound first like 80 people, then like 800 people, until one falls for the illusion that "everybody" thinks as you do, that you are "mainstream" when in fact you have traveled to the farthest margins of your humanity.

If you can convince yourself that the world is full of all the best sorts of people (the ones who read your blog) and that these best people all think the way you think, then you have created an illusion that there is an "us" and a "them"—the people like you are the GOOD Catholics, who accept every teaching unquestioningly and therefore feel entitled to cry "shame" at the rest of us, or they are the SMART Catholics who wouldn't dream of accepting anything out of Rome without first deconstructing it through the prism of the era; or they are the TOLERANT Catholics who will put up with any idea, as long as it is theirs, or they are the TRUE Catholics, who think they can right every wrong if they can just smack the bishops back into line with a sword of righteousness.

"They" are all of us. Catholicism contains fractious multitudes, and always has.

In a sense the church is as wide and deep as the Internet, but wisely constrained by the boundaries of 2000 years of well-wrought reason, and the Truth of Christ, which overcomes all of our illusions and pretenses.