Five Signs the Pro-Life Cause Is Winning

Editor's Note: The article below is published as a part of a symposium hosted by Patheos'Catholic PortalandEvangelical Portal, entitled, "For Life and Family: Faith and the Future of Social Conservatism."

The pro-life cause is winning. In state legislatures, in the media, and in grassroots efforts to reduce the number of abortions, pro-life activists have put abortion rights advocates on defense. The pro-life movement certainly has hurdles to overcome before the United States can become a place where all human life is legally protected. Yet the eventual outcome is certain. Here are five reasons I believe we have reached a tipping point in favor of the pro-life cause.

1) Public Opinion
A majority of Americans surveyed in a recent Rasmussen poll, including a large percentage of those who identified themselves "pro-choice," said they believe abortion is "morally wrong most of the time." Last year, for the third consecutive time, Gallup found that more Americans accept the pro-life label, a result that led the polling firm to acknowledge "a real change in public opinion."

One reason for this shift is the high-tech ultrasound machine that reaffirms what embryology textbooks have told us all along -- that the unborn child is truly a human being. In a recent Washington Post editorial, Frances Kissling, former President of Catholics for Choice, advised abortion-rights advocates to shift strategies: "We can no longer pretend the fetus is invisible." Yet few pro-choice activists seem to be listening to Kissling's advice. They continue to cast themselves as the defenders of "women's reproductive rights." This worn-out strategy fails to resonate with a large number of Americans because it ignores the point of tension. The debate has moved on from "reproductive rights" to the more perplexing question: "What are the unborn?"

Meanwhile, many people -- including some you would not expect -- are openly registering their unease with the procedure. Take the recently released autobiography of Steven Tyler, the "screamin' demon" lead singer of rock band Aerosmith. When he impregnated a teenaged girl in the mid-1970s, friends convinced them they could not raise the child and should seek an abortion. "They put the needle in her belly and squeeze the stuff in and you watch," Tyler recounted. "And it comes out dead. I was pretty devastated. In my mind, I'm going, Jesus, what have I done?"

Twenty years ago, many of those who considered themselves "pro-life" were a little hesitant to say so publicly. Today, the reverse is true. Even those who advocate a woman's right to abortion don't want to fight for that position too passionately.

2) The Media
In 1972, an episode of Maude concluded with the central character choosing to have an abortion. One would think that nearly forty years later, we would be past this debate. Not so. In fact, filmmakers and television writers have discovered that fictional abortion not only kills a fetus, but kills a story as well. Movie and television characters who wrestle with the decision (Dr. Abby Lockhart on ER, for example) almost always choose life.

That's why even pro-choice filmmakers choose life in the end. Juno is a good example. The pregnant teenage girl approaches an abortion clinic and meets a pro-life friend who informs her that the baby has a heartbeat, can feel pain, and already has fingernails. Juno chooses "to appreciate her miracle."

Similarly, in a 2009 episode of Law and Order ("Dignity"), a female attorney seeking justice for a murdered abortion doctor is shaken by a description of partial-birth abortion. "I grew up thinking Roe v. Wade was gospel," she says. Now, "I don't know where my freedom ends and the dignity of another being begins."

The media is not leading the way when it comes to the pro-life cause. It's only catching up to the sweeping pro-life sentiments of the majority of Americans. Yet the shift in popular culture reflects the progress the pro-life argument has made.

When considering whether all religions are in some way one, the smart money...
James Ford
2 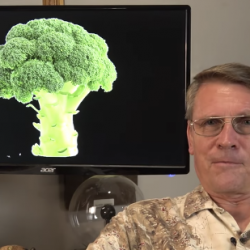 Creationist Kent Hovind "Bodyslammed" Me, Says Ex-Girlfriend in Court Filing
Hemant Mehta
Get Patheos Newsletters
Get the latest from Patheos by signing up for our newsletters. Try our 3 most popular, or select from our huge collection of unique and thought-provoking newsletters.
From time to time you will also receive Special Offers from our partners that help us make this content free for you. You can opt out of these offers at any time.
see our full list of newsletters
Editor's picks See all columnists