Gay Marriage Is Not Inevitable 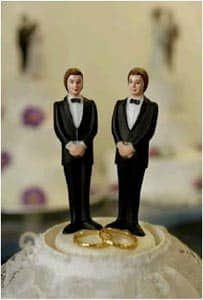 Can we win? The future is unknown. But let me tell you the present: This spring, we fought and won the battle against gay marriage in two of the deepest-blue states in the nation, Rhode Island and Maryland. I believe we are about to win, again, in New York. In each case we were told it was a done deal; gay marriage would be impossible to stop. It wasn't.

We are told repeatedly that these victories will be impossible to win. We keep winning them anyway. Intellectuals and writers who want to predict that this struggle is unwinnable ought to ask themselves: why am I writing this? Do you really want us to stop winning victories because you believe in the future they will become impossible? What's the point of that prediction except to sap the will to stand?

Gay marriage advocates have stopped trying to persuade their fellow citizens that gay marriage is good and have started trying to persuade them to give up. Why is the "argument from despair" so prominent? Because victory in any war happens not when one side is annihilated but when one side gives up the will to fight. The same holds true of culture wars. My question is: Why do we even ask ourselves this question?

There are deeper battles than the legal battle, and not everyone is called to do everything.

But surrendering on the legal definition of "civil marriage" is not a prelude to winning any of those other deeper battles. It is a prelude to an ever deeper surrender to the main idea now being propagated: if you believe in the message of Genesis, as repeated by Jesus—that marriage from the beginning has been the union of male and female, husbands and wives called to give themselves to each other and to their children—then you are a bad person. You are like a racist. You should be ashamed and shamed in public. You should, ideally, lose your job.

Once we decide to give up on the public fight on marriage, what's next? What's next is shaming, punishing, and economically harming those who speak up for the biblical view of marriage—as the fates of Peter Vidmar and Damian Goddard have recently illustrated. What's next is the use of government, through the public schools and other avenues, to teach that the biblical view of marriage is discredited bigotry. See "Can We Please Just Start Admitting That We Do Actually Want to Indoctrinate Kids" for evidence.

Surrendering marriage merely leads to the next fight, the fight over whether "bigots" should receive religious liberty protections—and beware: racists don't get conscience protections.

Gentlemen may cry truce, truce, but there is no truce. Those who decide to submit or withdraw or to mute themselves and their beliefs, under the heat now being generated against those who stand, will find it hard to find a principled place, later on down the very short road, on which to stand.