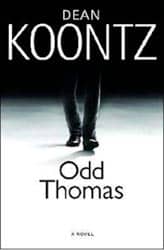 A common lament among Catholic readers is that there are no great modern Catholic writers. They often cite works from the 1940s-60s by authors such as Flannery O'Connor, Graham Greene, and Walker Percy to underscore their point.

The truth is that there are a number of wonderful Catholic authors writing today who, like the authors above, write interesting and absorbing fiction that the average reader would not readily identify as Catholic. Yet Catholicism defines the underlying world view and subtly pervades their novels in readily identifiable ways if one is looking for evidence.

Possibly the most prolific and well known of these is Dean Koontz, whose suspenseful books often combine elements of science fiction, horror, mystery, and the supernatural, leavened with the occasional touch of humor. His books are frequently on the New York Times bestseller lists and many have been adapted for film and television movies.

Often incorporating horrific examples of evil which would seem to be tailored to the current American taste for the sensational, Koontz's books never glorify the villain or portray evil as glamorous. They serve as an opportunity to examine serious themes about the importance of faith in God. Good characters suddenly realize that it is their task to participate actively in the fight of good versus evil. As Koontz said in a 2007 interview:

Evil walks among us. We don't always see it. Each of us, in our daily lives, encounters evil; we are tempted to evil every day of our lives. If we don't want to read about it or think about it, I don't think that's a truly Christian point of view. We have to acknowledge it, face it and defeat it. That's what each of my books is about.

For those who may quail, as I do, at a style of horror writing that can be fairly gruesome, Koontz's series featuring a gentle character named Odd Thomas are different. I first heard Koontz discussing this series several years ago on his podcast and was intrigued.

My name is Odd Thomas. I live an unusual life.

Those two sentences came to Koontz complete and with an image of Odd Thomas himself. A disciplined writer, Koontz put these ideas aside until he finished another project. Also intriguing is that Koontz's fan mail for Odd Thomas far and away outstrips any other that he receives. He attributes it to the fact that Odd Thomas is completely humble.

Although Koontz simply writes adventures without a Catholic agenda, one definitely finds traces of Christian thinking in the Odd Thomas books, sometimes more obviously stated than one might expect.

Civilization—says my friend Ozzie Boone—exists only because the world has barely enough of two kinds of people: those who are able to build with a trowel in one hand, a sword in the other; and those who believe that in the beginning was the Word, and will risk death to preserve all books for the truths they might contain.  (Brother Odd by Dean Koontz)

Odd Thomas is indeed completely humble and he is striving as hard as possible to do the task assigned him in life. That task? He sees ghosts and helps convince them to move on to the next step. Odd isn't sure what awaits ghosts beyond this world but his girlfriend, Stormy, has a vision of an army of souls on some great mission in the next world. She calls this life "boot camp" and tells him that it is intended to toughen us up to serve in that army.

The ghosts aren't the main problem, although they do help him bring wrongdoers to justice. Odd also sees menacing shadows which he calls bodachs. The shadows themselves do no harm and only appear around people who are going to be victims of an extremely grisly death. As the bodachs show up ahead of time this gives Odd an opportunity to try to figure out what tragedy is unfolding and to stop it. Odd also has the more benevolent otherworldly companion of Elvis, who is afraid to move on to the next world but likes keeping Odd company.

Each of the Odd Thomas books encapsulates a different genre. The first book, Odd Thomas, is like the horror movie in the small town. The second book, Forever Odd, looms as a haunted house tale (or haunted castle would be more accurate). Brother Odd, the third and my favorite of the series, is the "isolated in the mountains and snow storm and there's something big out there trying to eat us" horror story. Odd Hours, the final book, is the "action movie" thriller story. Although each can be read as a separate adventure, the first book contains a significant event which marks Odd forever; it influences every subsequent action, so it is best to begin with Odd Thomas.