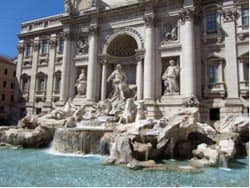 When we were planning to travel to Rome, I asked God if He would somehow help me to "see" this beautiful city. I had always dreamed of being able to go there one day, and now we were, but would I be able to have the experience I hoped for? For those who read my husband's work, you have already followed his photo travelogue. Now I will take you on a tour of Bella Roma through the "eyes of a blind pilgrim"!

I admit that there were times I wished that I had physical sight to take it all in, but the Lord was so faithful to "show" me the things He wanted me to notice. Maybe in some ways because I wasn't distracted by all the "noise of sight," if that makes any sense, I was able to focus on what He was showing me. All of it seemed a bit overwhelming just from Ed's descriptions.

To be at the Trevi Fountain, or any of the other beautiful fountains around the city, and to just listen to the water falling, was amazing to me. I have heard it said that the fountains are the "music of Rome," and I would agree with that. Ancient and modern Rome literally live side-by-side, and it is a city that is alive from the movement all around—the modern-day charioteers zooming through the streets, to the many pedestrians talking as they pass centuries of history.

Since we saw so many beautiful churches, I will focus mostly on a couple of those. In each church we visited, God gave me a gift, and I felt His presence with me as if He was my "Holy tour guide."

We took two tours of the Vatican, one public and one private. Both were very interesting in different ways. A reader of Ed's arranged for him to have an interview with Fr. Mark Haydu, who is in charge of the Patrons of the Arts program for the Vatican Museums. When Ed spoke to him, he told Father that May 3rd --the day we were going to meet him at the Vatican—was the anniversary of my First Communion. I hoped to be able to attend Mass. When he heard this, he invited us to go to the official parish church of the Vatican by Porta Sant' Anna, which is for those who live and work in Vatican City. This was very special, and will always be a treasured memory.

Br. Michael Maciborski, a seminarian, met us after the service, and took us to places where tourists don't normally get to go. We walked all over the Vatican, and were able to see the laboratories where they are painstakingly restoring the ancient artwork. We then went to Fr. Mark's office, and after Ed's interview, Fr. Mark said a prayer of blessing for our marriage, and for our family. Wow, what a day!

Some of the larger churches provided audio headphones to help tourists understand and appreciate what they were seeing. That was very helpful for me. When Ed would go off for a few minutes to take pictures, I would kneel at an altar rail or a pew. As I prayed, I felt the Lord meet me there in a special way. I really needed to find a quiet place inside myself to absorb it all. Even though I was in awe of all that surrounded me, when I was praying I felt such a peace, as if I was all alone with the Lord. Maybe He allowed me this interior grace because I couldn't experience it all through my sight.

The 5th-century Basilica of Santa Maria Maggiore was one of my favorites of the large basilicas. I heard Mass in a side chapel off to my left as I knelt at the altar rail, and felt a group surrounding me at one point. They were teen and preteen students from Poland, and they all began to sing an incredibly beautiful hymn in Polish!

In an annex off the Basilica of St. John Lateran, is La Scala Sancta (the Holy Stairs), which tradition says St. Helena—the mother of the first Christian Emperor, Constantine—brought back from Jerusalem. These are believed to be the stairs that Jesus would have walked on when He was brought before Pontius Pilate. The ancient marble staircase has a wooden riser on top, but you can see, and feel the marble between each stair. As we ascended the twenty-eight steps on our knees, I was thinking of the scripture passages at this point in His passion. I touched the marble steps as we climbed. At the top, I sat on a bench to the side while Ed took photos, and I meditated on the fact that I could well be sitting near where Jesus stood when Pilate said, "Behold the man" (Jn. 19:5). Going up these stairs on our knees wasn't easy, but that was nothing as we thought of His sacrifice for us. As we left, for a while we were both quiet, absorbed in our own thoughts about what we had just experienced.