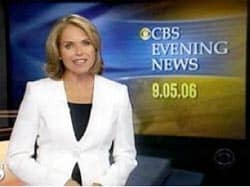 Thursday, May 19th, the night of her final broadcast as anchor of "The CBS Evening News," I was having dinner with my wife and another couple in Winter Garden, Florida—celebrating, in fact, the four-year anniversary of my ordination to the diaconate. It completely slipped my mind that it was the night of Katie's last hurrah.

How could I have missed it? I was there five years ago, as she made history with her debut as the first solo female anchor of a nightly news show. I was one of the hundreds of CBS News employees—producers, writers, camera operators, researchers, interns—who gave her a standing ovation as she returned to the newsroom after that first broadcast, beaming that trademark smile. She toasted the night with champagne. Les Moonves, the president of CBS, donned a baseball cap with the words "The CBS Evening News with Katie Couric" embroidered on the front. He gave her a big hug. Flashbulbs popped. Speeches were made. The air was heady with history. A few people noticed that the Academy Award-winning composer James Horner was also there; he'd composed the new theme music for "The CBS Evening News." (The sheet music was later framed and hung on Katie's office wall, with Horner's signature. "For Katie, a fanfare for the UN-common woman," he scrawled.) What everyone knew that night, but nobody wanted to say out loud, was that Horner's greatest success had been the score for a movie about a disaster, Titanic.

Maybe that should have given everyone a clue.

People have spent the last five years scratching their heads and wondering: what went wrong? One who will have none of that, though, is New York Times columnist, Gail Collins, who last week hailed Katie Couric's troubled tenure as a triumph. As Collins put it:

From my perspective as a charter of the progress of American women, Couric was a total success. The first great mandate for a First Woman is not to screw things up for the Second Woman or the Third. On that count, Couric did great. She was under incredible scrutiny and pressure, and she held up her end. There was never a point at which American viewers turned to each other and said: "Well, that certainly didn't work out."

Not so fast. In fact, American viewers did say that. A lot.

A few months before Katie's show premiered, I was assigned as editor of her blog, "Couric & Co." It was intended to be CBS's answer to NBC's popular "The Daily Nightly." Editing Katie's blog for a year, I got a good sense of what American viewers were thinking about the woman and her show. A lot of them were unimpressed. More than a few were angry.

The problem wasn't that Katie was a woman. For decades, viewers had grown accustomed to seeing women anchor the news on cable and local stations, and no one had taken to the streets with torches and pitchforks. Despite Les Moonves' public contention that sexism was behind Couric's pitiful ratings (he at one point even compared her to Jackie Robinson, which would have been laughable, had it not been so patently offensive), the problem for Katie—and for CBS News—was not her sex or her gender, but the kind of woman she represented.

To many Americans, Katie was the sunny (okay: "perky") morning personality who had made Bryant Gumbel bearable, and who had excelled at putting her interview subjects at ease. She connected with people as the friendly, agreeable girl-next-door. In the popular imagination, she wasn't that far removed from Kelly Rippa or Mary Hart—and that was the problem. Again and again in the comments on the blog, people took offense that the woman from the Thanksgiving Day Parade was sitting in a chair once occupied by Walter Cronkite. Despite some enterprising journalism—the interviews after Columbine, that courageous colonoscopy on national television—she was not considered "up to the job." Some said outright that it was unearned.

Katie, unfortunately, did little to help matters. She clearly wanted the Evening News job not just for the history it would make, but for the opportunity it would provide to reinvent the stodgy Evening News format into something more like morning television, with a breezier attitude and longer interviews.

People got a good dose of that in the first week. The end piece of her first broadcast was billed as a worldwide exclusive: the first photographs from Vanity Fair of Tom Cruise's new daughter Suri. (It also featured the launch of a contest, asking viewers to suggest signoffs a la "That's the way it is." No signoff was ever selected, and the stunt petered out after a couple weeks.) The second broadcast included a lengthy interview, in Washington, with President Bush. Several weeks later, roughly a third of the broadcast was devoted to an extended conversation, in studio, with Michael J. Fox, discussing efforts to fund embryonic stem cell research.