Nothing tells memories from ordinary moments. Only afterwards do they claim remembrance on account of their scars. - The Narrator 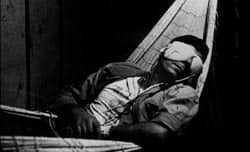 There are many things - most obviously its stylistic eccentricity—that make La Jetée, Chris Marker's shockingly unconventional short film, such a fine example of the notion that "the best things come in small packages."

A mere twenty-eight minutes in length, the film is little more than a slide-show, comprised almost entirely of Marker's spectacular black-and-white photographs—a carefully constructed photomontage that makes up all but a single brief "live" shot of its running time. Legend tells that its director was only able to borrow a movie camera for one afternoon while working on the film, so its unusual artistic approach may speak to the constraints of necessity as well as Marker's abundance of creativity. Yet the avant-garde flavor of the work he produced strengthens its message rather than detracting from it.

The film is a bit of a cinematic onomatopoeia, producing in its audience the very effect it is describing. By eliminating the motion through which viewers perceive the passage of time, it produces a timeless, dream-like mood that perfectly matches its hero's surreal journeys through his past and future.

The story unfolds through a quietly poetic voice-over and the shifting stills tell of a world devastated by the consequences of a third world war and of the human remnant struggling to survive in its cataclysmic wake. Humanity's only chance, we are told, is "to call past and future to the rescue of the present."  Experiments into time-travel represent mankind's lone shot at survival, one hobbled by the availability of suitable test subjects.

The film's protagonist, described simply as The Man, possesses a rare trait essential to the project's success: a powerful "signpost" memory from his childhood that serves as a focal point for his journeys, shielding him from the temporal disorientation and eventual madness that so many of his fellow subjects have experienced. A slave to the dystopic society that has sprung up in the post-war years, The Man has no choice but to submit to the newly-discovered process, burdened with the knowledge that he may well represent the dying gasp of an entire world.

He embarks on a bizarre and terrifying voyage, chillingly described by the narrator: "The Man does not die, nor does he go mad. He suffers. They continue." Gradually, however, the memory he holds most dear—an afternoon with a beautiful young woman on the great jetty at the Paris-Orly Airport—grows even stronger and more focused.

Eventually, The Man finds it possible to use that memory as a guiding star, moving through time in relation to the young woman he has grown to know so well; a signpost pointing the way to the salvation of an entire race. Yet even as The Man becomes convinced of the experiment's success, things are not what they seem, and the aura of foreboding that weaves its way throughout the story proves sadly (yet unpredictably) prophetic.

Despite its brevity, La Jetée touches on a number of fascinating questions: human recollection and the role memories play in what an individual has done and will do; the importance of remembering truthfully rather than remaking one's past to suit one's wishes; how far a society is (or should be) willing to go in order to preserve itself; and the dangers of thinking that one's future is no longer a secret.

Perhaps the most fascinating way of understanding Marker's unique hybrid, though, is to recognize it as a metaphor for one of mankind's most troubling tendencies: an unwillingness to actively live out our own lives in the time that is given to us.

Like all created things, we exist in the "Here and Now"—a tiny jetty of stability jutting out into the roiling surf of the Past and the Future. But unlike our less rational Earth-dwelling companions, we humans are uniquely capable of manipulating that vast chronological ocean, using our memories as life-saving reference points and our dreams as vital motivations for our present actions.

Unfortunately, we are just as capable of using it as a shield from the often harsh but all-important reality of our daily lives; we bask fondly in the warm glow and nostalgic bouquet of our past or reveling in the wishful fantasies of our spectacularly-unlikely future; ignoring the very real present all the while.

La Jetée's Man, with growing self-awareness, embraces the past as a means of escaping the truth awaiting him in his present-day existence. But his efforts to live history anew distort and destroy his remembrances even as he struggles to make them more meaningful then they can ever be. Our memories have many useful and essentially human applications, but asking them to serve as a replacement for reality is a perversion that we must avoid at all costs.