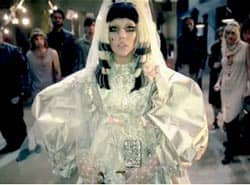 "Gaga for the Lady," said the large headline. And then in smaller print: "Naked Came the World's No. 1 Pop Star. Who is she?  Why is she?  Should you worry?"

Lisa Robinson, author of the profile, wasted no time explaining why. Gaga, she wrote, "has been described in thousands of press clippings as bizarre, a drag queen, fierce, a hermaphrodite, a gay man trapped in a woman's body, a self-parody, outlandish, hard-core, trashy, genius, futuristic, grotesque." She

has appeared in videos, on TV, at award shows, and in "real life" wearing—including but not limited to—a coat made up of Kermit the Frog Muppets, a telephone atop her head, a dress made out of oscillating rings, a striped vinyl sheath . . . sunglasses made out of cigarettes, antler headbands, a lobster hat, Marie Antoinette wigs, red lace veils with matching crown, bras spurting fire, catsuits made of bones and Ace bandages . . .

And all that might have been her prosaic side.

Gaga has also worn a dress of raw meat and another that explodes fake blood. In her video for the song "Alejandro," she swallows a crucifix while sporting a red latex nun's habit, part of a storm of images so freakish and disconnected even Nietzsche would have thought, "Oh my God."

"All that's missing," wrote Robinson, "has been for the Catholic Church to weigh in."

Though I would love to know the Latin for "Lady Gaga," something tells me no plans are afoot for a Gaga-inspired encyclical. But some prominent Catholics are starting to weigh in. On the blog of America magazine, Michael O'Loughlin wrote in March that Gaga is a model of "unconditional love and acceptance" and a "prophetic voice." At the same site, Fordham professor Tom Beaudoin recently noted that Gaga's popularity among his students had caused him to "think about how the theological tradition might relate to her and to my students' fandom."

Coming from a different perspective is Bill Donohue, President of the Catholic League. Commenting on Gaga's latest song, in which she professes love for Judas (yes, that Judas), Donohue told the Daily Mirror that Gaga is "talentless, mundane, and boring . . . [a]nother ex-Catholic whose head is turned around."

To the extent the typical Catholic even knows about Gaga, my guess is that he or she is inclined to dismiss Gaga as Donohue does. I know that when I think of the weird images and disturbing lyrics, my impulse is to reject and move on.

But that reaction, while charmingly simple, is naïve. I believe we do have reason, based on our Tradition's own self-understanding, to consider, as Professor Beaudoin puts it, "the theological contact (and conflict) points" in her images and songs.

"The Signs of the Times"

In Gaudium et Spes, the Second Vatican Council famously stated that the church "carries the responsibility of reading the signs of the times and of interpreting them in the light of the Gospel." The church, said the Fathers, "must be aware of and understand the aspirations, the yearnings, and the often dramatic features of the world in which we live."

In light of that intent, another observation from the Vanity Fair piece is worth noting. According to Robinson, Gaga

is, without question, the world's biggest pop star . . . She has had close to 800 million views of her videos on YouTube. She recently broke the record on Facebook with more than 12 million fans—surpassing those of President Obama's. Digital downloads of her singles have reached more than 25 million.

There's more. Time voted her one of the 100 most influential people of 2009, and Barbara Walters named her one of the "Ten Most Fascinating People" that same year. Oprah dubbed Gaga a "cultural and spiritual leader."

Her fans agree. They view Gaga like a lot of voters viewed President Obama prior to the election: as a shade of the supernatural, someone who initiates a way of thinking, a way of being, at once healing and salvific. According to Robinson, Gaga's fans send her thousands of books and paintings, many filled with stories about broken families, abandonment, struggles with sexuality, self-hatred, and bullying. In the wake of her video for the song "Paparazzi," a video in which Gaga rises and walks from crutches and a wheelchair, Gaga said, "I had girls in wheelchairs crying to me at meet-and-greets, telling me that when they saw that video it changed their lives."