Making Peace Between Our Souls and God: A Review of "The Tree of Life" 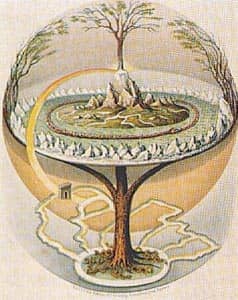 If you've spent any time tooling around the great cathedrals of Europe, you'll be familiar with the fragmented, impressionistic, and profound sense of transcendent awe created by Terrence Malick's new film, The Tree of Life.

Like the epic stained glass windows, gilded altar pieces, and sacred statuary in a cathedral, Malick's film tells a story of faith. Also like sacred art, much of the truth of the work comes from the parts around the edges of the story: the sun streaming through a pattern of glass, a flicker of a candle cast on the face of a marble Jesus, the mystery of tiny tiles uniting into a mosaic. The beauty creates a sacred, transcendent emotion into which God—we hope in our smallness—speaks.

If the medium of the Renaissance was glass, gold leaf, and paint, the medium of our age is images, music, and story. Malick pieces these elements together to create a work of sacred art that is more similar to a mosaic or stained glass window than to the type of stories we're used to seeing in the theater.

Pieced together of brief images, visual philosophic musings, great music, and a profound story, the dreamy but serious film tells the story of one man's faith as he reflects on the untimely death of his brother and his lifelong quest for God. Like a man's thoughts, it flits from image to image and memory to memory, sometimes lingering on a question or scene for a while, sometimes just flashing a sensation of the wind in the trees or a mother's soft touch. Floating over these images are whispered prayers, heart-cries of the characters. They are deeper and fuller of longing, pain, and joy than words we consciously string together.

Like most of us, Jack (played in adulthood by Sean Penn) forms his earliest ideas of God from the lessons—both intentional and unintentional—he learns from his parents. His mother, played by the sublimely beautiful Jessica Chastain, infuses his world with her love for the way of grace. "There are two ways, the way of nature and the way of grace," she believes, and "no one who loves the way of grace will come to a bad end."

Jack's father is another issue altogether. To Jack's mind, father is the antithesis of mother. If she is the way of grace, he is the way of nature. As he grows, Jack finds no flaw in his mother, but all too clearly sees the flaws in his father. Many critics frame the father, played excellently and fearlessly by Brad Pitt, as harsh, unyielding, and rigid. I disagree. The father is a man grounded in a time and place, raising his three boys in the post-War '50s and his attitudes will feel very familiar to those of us who remember the Greatest Generation. Alternately tender and demanding, he is a man we would call a good father. He gives his boys no room for excuses, teaches them to be tough, and gives them aspirations not because he is mean but because he cares for them. Unlike the mother of Jack's memory, father makes mistakes, sometimes belittling the boys, or mocking them, or occasionally losing his temper. To adolescent Jack, these human errors are enough to challenge his faith in God. It is not the father's fault that Jack idolizes the mother and demonizes the father, but it is often so with little boys.

Our loved ones know so little of what goes on inside our brains and souls. Jack catches both his parents' faiths as reflections bouncing off their own souls, but does not truly know their inner lives. Nor do they know his. When Jack breaks into a neighbor's house and steals a nightgown, he flees in guilt and terror of discovery. He is never discovered or even suspected, at least on Earth. These soul-churning events are almost unknown to his parents. He wrestles with his father, with jealousy of his brothers and father, with his own misdeeds. As this turmoil boils over, he turns and screams at his father, "She [his mother] loves me! Only me!" Sublimely, his father only gazes at the boy with amused bewilderment, not wrath. He has had no idea of the thunderclouds in his son's soul.

The business of The Tree of Life is the cosmic importance of making peace between our souls and God. The film has no room for the mundane or everyday. Jack goes through the cycle of early bliss in his personal Garden of Eden to questions about why God allows bad things to happen. He experiences The Fall, turning away from his mother's rules and God's demands. He feels the pang of exile, loss, separation, and distance from God, his mother, and his garden. He seeks repentance and reconciliation.