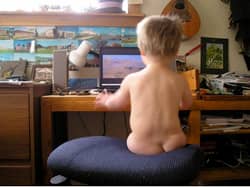 A sharp-eyed reader, having spotted a flaw in my punctuation, said so in my combox. Under ordinary circumstances, this would have been a small thing. But the fact that punctuation, its intricacies and their delights, had been the subject of the blog post under discussion complicated matters immeasurably. Ignoring the post would have meant risking a loss of face. Editing the text in accordance with the commenter's instructions would have set a dangerous precedent—a sort of Magna Carta, binding myself to my readers' will.

In the end, I took a very simple detour around that snarl of potential problems: I deleted the comment. The despotic quality of the act made me shudder. I was curtailing freedom in the service of order—an order I just happened to equate with my own prestige. I had made this reader's feedback a desaparecido, as surely as if I'd tossed it into the Rio Plata from a low-flying plane.

In the three weeks during which I guest-blogged at the Anchoress—a commission no less awesome or flattering than being picked to guest-command the U.S.S. Carl Vinson—I found myself recalling Satchel Paige's caveat: Don't look back. Something might be gaining on you. Time and again, over the past fifteen years, those who deal in the written word have been trampled from behind by people they'd written off as upstarts. Print journalists put on airs around their online colleagues—until Forbes.com exposed the trumpery that Stephen Glass managed to pass more or less under the noses of New Republic's editors. Professional journalists dismissed bloggers as "men in pajamas" until bloggers supplied evidence calling into question the veracity of the so-called Killian memos, which suggested President George W. Bush had shirked duty during his final year in the Texas Air National Guard.

So we're seeing an outward shift of authority, from newsprint to digital, from the formally accredited to the self-trained. The recent Scott Adams flap may demonstrate the final step in democratization—the empowerment of the reader at the writer's expense. Dilbert's creator, having published a piece titled "How to Get A Real Education" in the Wall Street Journal, was incensed to see a string of critical comments at MetaFilter, a site to which the piece had been linked. Concealing his identity with the handle "plannedchaos," Adams proclaimed his own genius and attacked his critics. Once exposed, he had no choice but to confess. The performer had taken a stage dive and gotten his teeth kicked out.

In one sense—in many senses—this is great stuff. Just because a person possesses the means to submit his thoughts for public consumption, doesn't mean those thoughts are worth a tuppenny dam. If he's brash enough to assail readers with his ideas, fair play demands he suffer their slings and arrows in his turn. When novelist Michael Chabon condemned the "slagosphere" for the attacks on his wife, Ayelet Waldman, that followed "Truly, Madly, Guiltily," her essay on motherhood, his spoiled-aristo tone was impossible to miss. Waldman wrote a deliberately provocative piece, boasting about the intensity and variety of her marital sex life, and declaring that she could survive the death of her children, but not her husband. Can the two have expected nothing but pats on the back?

I never encountered any reactions so intense as the ones that set off Chabon and Adams. Far more than my own discretion—hit or miss at best—I credit Elizabeth Scalia, the regular Anchoress, for having cultivated a core of patient and generous readers. But she accomplished this feat partly by demonstrating a quality quite outside the writer's traditional skill set: a genius for crowd control. Time and again, when reader responses turned hostile, I have seen her wade into the combox, issuing warnings and calling out her critics for malicious misunderstandings of her work. That she swings the truncheon with an air of affectionate exasperation—a sign she's raised two boys—can only make readers admire her the more.