So it's almost over. Not the world, but the Rapture-That-Wasn't media cycle: not a single rapture reference in Google's top twenty Hot Searches, that New York Times article is out of the "most emailed" box, the rapture jokes in your Facebook feed are buried off the front page. Left behind are the scolds and the weekly columnists who missed their best chance to comment on the story last week.

I fall into both of the latter categories. There are few roles in life to which I am more naturally suited than the scold. And it's true: I did find the endless ridicule insensitive and often cruel. I was put off by the voyeuristic odor of the reporting. I have been appalled by the gleeful after-game schadenfreude. (Ever the over-achiever, I'll even scold the scolds: it's just as condescending to express ostentatious "sadness" for the stupidity of the duped as it is to ridicule them outright, folks.)

I was moved by the poignancy of misplaced faith and disillusionment, it's true. I felt a kind of grief in contemplating the plight of the believers on the morning after, a lot like I felt after reading the New Yorker exposé of Scientology a few months ago. But I don't know enough about the believers to judge whether they acted with willful ignorance and blindness, nor do I know enough about Harold Camping and his religious organizations to judge whether he is a charlatan or sincerely misguided. The soul has no windows.

So I don't want to defend the claims that Camping made: the morning of May 22 showed them to be indefensible, although Camping will certainly now re-interpret and re-assert. Nor do I want to defend the kind of claims he made: I don't find the marriage of numerology and eschatology to be spiritually compelling, even though Mormons have flirted with their own versions from time to time. But I do want to defend the idea of the kind of religious claims Camping made: concrete claims about the actual nature of the universe that have the courage to open themselves to the possibility of being proven wrong.

I respect this kind of claim not because it is often vindicated; on the contrary, most confrontations between religion and empiricism end with religion abandoning its claims or revising them to accommodate the empirical consensus. Galileo is the paradigmatic case. Nor do I believe that religion and rationality fit seamlessly together in the modern world; there are real, intractable conflicts between the ways of knowing offered by faith and those available from reason, and simplistic syntheses fail.

But I respect the integrity and courage of modern believers who are willing to hazard what scientists call "falsifiable" claims. There are fewer of these all the time, as liberal religion withdraws ever further into the epistemological safety of metaphor, into the language of "value and meaning" rather than reality and truth. Stephen Jay Gould popularized the phrase "non-overlapping magisteria" to suggest that science and religion hold authority over entirely separate spheres—science over the physical world, religion over moral guidance—and thus there is no real conflict between the two, because there is no point of epistemological convergence. This distinction is socially and politically useful for both science and religion, but it's artificial and muddled. And the writers of scripture certainly held no such distinction; scripture routinely makes sweepingly forthright claims about the nature of the physical world, human nature, and historical time. I admire believers who recognize the meaning of their scripture and refuse to be cowed by the bullying and ridicule of scientism.

There is a fine line between honorable courage and anti-intellectual blindness, of course, one that I have had to navigate with my LDS co-believers. Our faith tradition is one that continues to make a number of outrageous—to outsiders—falsifiable claims, claims naked to empirical scrutiny by our relatively short history and the availability of historical evidence. The origin of the Book of Mormon has been an especially acute test case: we have had to come to terms with claims that DNA evidence disproves the possibility of an ancient Israelite colony in the New World. (For the record, I don't believe that it does. But I have my own wrestles with apparent textual anachronisms in the Book of Mormon.) I hope we're finding the way with integrity and grace. 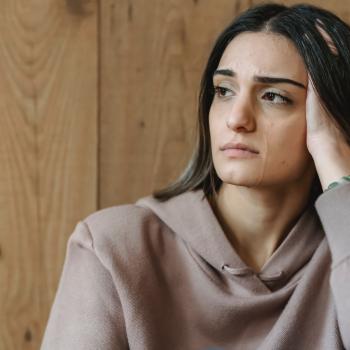 Being with Pain
Karl Forehand
3

Challenges and When to Let Go
Pamala Oslie
Get Patheos Newsletters
Get the latest from Patheos by signing up for our newsletters. Try our 3 most popular, or select from our huge collection of unique and thought-provoking newsletters.
From time to time you will also receive Special Offers from our partners that help us make this content free for you. You can opt out of these offers at any time.
see our full list of newsletters
Editor's picks See all columnists