To My Mother, the Reluctant Catholic: A Mother's Day Tribute

My mother is the best Catholic I've ever known. That might sound a little strange when you consider she hasn't been to Mass since the fall of 1962, but there it is.

While raising me, by herself, in Manhattan of all places, she was stewardship personified. When we moved to the City in 1979, she was working as some kind of sub-sub-sub-editor for the company that published The World Almanac and Book of Facts. I don't know what her salary was, but it was low. I don't know what our rent was, but it was high. With an instinct that would have impressed a Franciscan, she pinched her few pennies with panache. Dressing in jeans and boys' blazers, she managed to look stylish in a BoHo sort of way—"Annie Hall chic," she liked to call it. She sniffed out every free amusement in town; when Simon and Garfunkel played at the Great Lawn, in Central Park, we were there—well in the back, but still there.

New York in the 1980s, pre-Giuliani, was not the asphalt Disneyland Adam Gopnik celebrates in The Children's Gate. No, for all its museums, its opera houses, Symphony Space and the 92nd Street Y, it could be a very scary and dangerous place. Threading a path through the creeps and the muggers, the winos and the pervs did get to her, but I picked this up only occasionally, from the smallest of cues. For my first Christmas in New York, she took me to Rockefeller Center, to watch the lighting of the big tree. To put it mildly, we had a lot of company that evening. Somehow, I got caught in the crush. For a moment, I had the breath squeezed right out of me. Suddenly I heard my mother shout, "There is a child in there!" Noting her rage-whitened face, the crowd parted just enough that I could breathe again.

Toward the world, my mother adopted a truly Christian stance: she was in it, but not of it.

Where she really planted her flag was the world of letters. When I was 13, we got our first color television—with a 13-inch screen, as I recall. To our common satisfaction, it was banished to my room. Her own space, which was actually meant to be the living room, she filled with books—Dickens, Joyce, Edward Said, Allan Bloom. She speaks in perfect sentences. Once, on Cheers, I heard the following exchange:

Sam: I still think about you sometimes.

Sam: Mostly that you'll stop saying things like, "And I, you."

I remember thinking that Sam didn't know how good he had it—next to my mother, Diane talked like Moms Mabley.

My mother's cultivated airs did have their drawbacks. I came to associate literacy with girlishness. At the onset of puberty, I resolved to become a lowbrow. ("Bluto," my mother began calling me.) But years later, when I rediscovered literature as an act of rebellion against my journalism grad program, I adopted as my hero Aleksandr Sergeyevich Pushkin. It has since occurred to me that Pushkin is the male counterpart, the long-lost Russo-Abyssinian brother, of Jane Austen, my mother's favorite novelist. If Fitz D'Arcy and Zheniya Onegin had met, they'd have become fast friends. (Actually, they'd have blown each other's brains out in a duel—a sweet and fitting end for any Regency bromance.)

Stewardship, detachment and scholarship do not a Catholic make, of course. It was with her love of humility and disdain for pomp that my mother really proved you can take the girl out of the Church but not the reverse. Even after promotions at work and her success at writing young adult fiction had granted her some discretionary spending money, she scorned credit cards, chi-chi restaurants, Perrier and Tofutti—the whole grand monde of 1980s New York. When her son, young Andrew McCarthy, insisted on wearing Ralph Lauren, she gritted her teeth. Courted by stockbrokers, she fell in love with an engineer who rode a bicycle to work.

Though a natural introvert, she offers a listening ear to the lonely, especially the elderly. Her grandmother's dented diction made me laugh; my mother found poetry in it. "Them poinsetters what Bob give me was the reddest poinsetters of all," Gram once told my mother, referring to her boyfriend's Christmas offering. My mother repeated it throughout the train ride home, and might have slipped it into a book of quotations if she'd been allowed.

Against "tolerance," and "adieu" to teaching
Dan Peterson
2

What is the Difference Between Solitude and Being Alone?
Vance Morgan
3 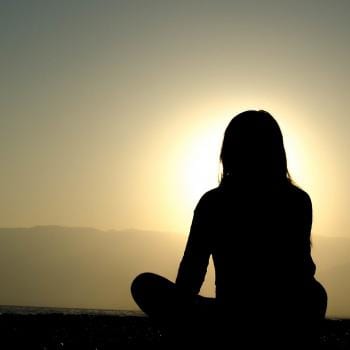 Chanting Can Aid In Connection To Deity, Spirit, Self
Gwyn
4

'Bury Your Bibles!' Says Mike Lindell
Andrew Hall
Get Patheos Newsletters
Get the latest from Patheos by signing up for our newsletters. Try our 3 most popular, or select from our huge collection of unique and thought-provoking newsletters.
From time to time you will also receive Special Offers from our partners that help us make this content free for you. You can opt out of these offers at any time.
see our full list of newsletters
Editor's picks See all columnists