Editorial Note: Dr. Dalrymple last week began a series on abortion but is interrupting that series to comment on the news of Osama bin Laden's death.

As news spread last night that the Navy SEALs' famed "Team Six" had raided a fortified compound outside Abbottabad, Pakistan, and taken the life of Osama bin Laden, a mood of post-partisan comity prevailed for about an hour. The man most directly responsible for the September 11 atrocity had finally taken an American bullet to the head. Crowds were gathering at the White House and at Ground Zero to celebrate. Even on the blogosphere and various social networks—digital locales not known for their political sensitivity—it was declared that this should be a night on which we are all Americans again, a night on which we celebrate the skill and perseverance of the American military and of the whole intelligence and national security apparatus that surrounds it. Some of the most irredeemably political people I know said there would be "no politics tonight."

However, as the gears of the American electoral system turn toward the next presidential election cycle, questions of credit and political consequences were not far from the surface. Richard Clarke, former counter-terrorism czar and a frequent critic of the second Bush administration, told ABC News—under the impression that bin Laden had met his fate at the end of a Predator missile instead of a rifle bullet—that Obama's emphasis on unmanned aerial vehicles had been vindicated. Once it was learned that bin Laden had actually been killed by commandos in an upscale suburb of Islamabad, correspondent Martha Raddatz declared—again without evidence—that Obama's "relentless" drone operations in the mountains of Pakistan must have driven bin Laden out of the caves and into the open. President Bush's former chief of staff, Andy Card, was put on the defensive.

When the President finally made his announcement, he gave generous credit to American armed forces and concluded with a stirring bit of American exceptionalism. "Let us remember that we can do these things not just because of wealth or power, but because of who we are: one nation, under God, indivisible, with liberty and justice for all."

It was a strong speech, but missing one element that would have forestalled the political gamesmanship a little longer. Obama referred to various actions "we" had undertaken in the nearly ten years since the 9/11 attack, but set the beginning of the timeline for this particular victory firmly within his own administration. "Shortly after taking office," he said, "I directed Leon Panetta . . . to make the killing or capture of bin Laden the top priority of our war against al Qaeda." From there, the story is Obama-centric. "I was briefed . . . I met repeatedly . . . I determined that we had enough intelligence . . . and [I] authorized an operation." Lest anyone should believe that Martha Stewart green-lighted the SEALs operation, he emphasized again: "Today, at my direction, the United States launched a targeted operation . . ."

Obama merits and will receive abundant credit and good will from the American people for the capture of bin Laden. According to my own friends who work in military intelligence, there was no noticeable acceleration of the attempt to find bin Laden after Obama came to power—we were already doing everything we could. Yet Obama never fumbled the ball; he kept the pressure on al Qaeda and, presented with a menu of military options against this compound in Abbottabad, he chose a commando mission that would minimize civilian casualties and offer conclusive certainty that bin Laden had indeed been killed. That decision was vindicated. Whether or not it is "the most significant achievement to date in our nation's effort to defeat al Qaeda"—the toppling of the Taliban and the defeat of al Qaeda in Iraq can certainly compete for that title—killing bin Laden will go down in history as one of the principal accomplishments of the Obama administration.

Yet I cannot help but feel there was a small missed opportunity here. Obama has made an art form out of avoiding giving President Bush credit. He has not shared the praise with Bush as he completed the drawdown of forces from Iraq that Bush initiated, or carried forward the surge in Afghanistan that Bush had planned, or perpetuated many of the Bush administration policies he once deplored from the campaign trail. Bush himself was characteristically gracious, "congratulating" Obama and the military on this "momentous achievement." But by emphasizing himself as the only decider in the narrative that led to bin Laden's death, Obama is something less of a uniter than he might have been. He might have raised the issue above the toxic swamp of political manipulation it is sure to sink into.

Enough for Everyone (Part 3 of 3)
Herb Montgomery
2 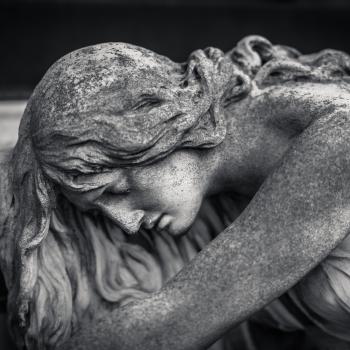 You are Not Alone in Your Grief
Irisanya Moon
3

Pastafarians' 'Old & New Testicle' biblical references make it a 'hoax'
Barry Duke
Get Patheos Newsletters
Get the latest from Patheos by signing up for our newsletters. Try our 3 most popular, or select from our huge collection of unique and thought-provoking newsletters.
From time to time you will also receive Special Offers from our partners that help us make this content free for you. You can opt out of these offers at any time.
see our full list of newsletters
Editor's picks See all columnists