What Does the Marriage Want? 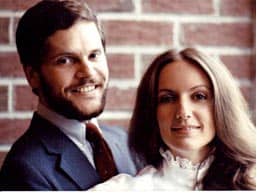 In the summer of 1983, I found myself in the leafy backyard of a split level home in Potomac, Maryland, surrounded by burgers and balloons, toasting the 25th wedding anniversary of Gerry and Brenda Meyer. I shouldn't have been there, and under most circumstances, I wouldn't have been. But this was different. I was dating their daughter at the time, and just happened to be one of a string of friends and extended family who had gathered to mark this occasion and enjoy a beer or two.

Their four kids were there, and Gerry and Brenda's own parents—three generations in all. The event, as I remember it, was cheerful and robust and fun, one of those family gatherings that is collected in memory with a string of other events, like birthdays and graduations, and doesn't seem to have all that much significance, until you look back three decades later and think, "How long ago was that? Wasn't it just last year?"

I've been thinking that a lot lately. Three years after that backyard barbecue, I married Gerry and Brenda's daughter. And this month, on May 24th, we will be marking our own 25th wedding anniversary, with a renewal of vows and a quiet dinner and a growing sense of gob-smacked wonder. Where on earth did the time go?

That song from my misspent youth keeps coming back to me: "Time keeps on slippin', slippin', slippin' into the future . . ." Yeah, that about says it. And I look at all the things that have happened in the last quarter century, all the other barbecues in that backyard and that mileposts that we use to measure our lives—babies born, grandparents buried, houses sold, graduations marked. The world is different. We are different. I think with particular poignancy about my wife's siblings. There they were: four kids, raised in what anyone might call a "Good Catholic family," attending mass every week and receiving all the sacraments and learning to live the fundamentals of the faith. All went to Catholic schools and high schools. Two of them went on to Catholic colleges.

And yet, their divorce rate is no better than the national average. In fact, it's worse: 75 percent. Today, of the four, three have divorced. Two have remarried. For some reason, my wife and I possess the curious distinction of being the only original marriage in that generation of siblings that stayed together. How did that happen? I wish I knew. If I had the recipe, I'd bottle it.

You can never tell, on the day when the vows are said and the petals are strewn and the rice is thrown, whether a marriage, any marriage, will last. Just ask Arnold and Maria—or, for that matter, almost anyone in your own family. I think we all discover, sooner or later, that this marriage thing is a lot harder than it looks. I'll never forget the story of an older woman who once told a priest, "Father, when you're walking down that aisle on your wedding day, you don't see the Stations of the Cross."

Marriage is like that—there are falls and stumbles, struggles and surrenders. It isn't always a trip to Niagara Falls; sometimes there are detours to Calvary. My wife tells me that Benedict Groeschel once said that when you marry another person, you marry your cross. That makes marriage seem like such an ordeal—a heavy wooden thing that ends up killing you. And for some, I'm sure, it can seem that way.

But across twenty-five years, I think it's so much more mysterious than all that.

Beyond the sacramental grace involved—and grace and prayer do play a big part, I think—it's a lot of talking, and a lot of listening, and a lot of patience, and a lot of persistence. It's wanting this little partnership to hold together, in spite of all the temptations and opportunities to make it rupture. It's realizing, day after day and year after year, that the strange and beautiful "something" that drew you to this other person still matters. It's making the choice to stay married, every day, because you know in your gut and in your head that your life is infinitely better because this other person is a part of it.

It's companionship and partnership. It's trusting—not just in each other, but in God, to help you over the rough patches. (And let's not fool ourselves: there are always rough patches.)

It's understanding from Day One that marriage is a living, breathing thing that needs attention and nurturing, and you have to give it the time and love that it needs to grow.

It's taking seriously the notion that in marriage you two become "one flesh."

A smart man once put it to me this way:

"There are three parties in a marriage," he said. "The husband, the wife, and the marriage itself. Sometimes, you have to put aside what the husband wants, or what the wife wants, and ask, 'What does the marriage want?'"