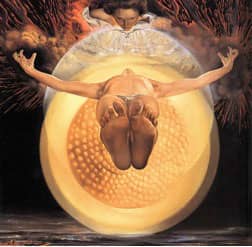 It reads like a movie finale, complete with special effects . . .

Jesus and his truest companions are in the soul-stirring closing scene. Strong, important, curious words are uttered, recorded for posterity.

The proverbial torch is passed to the noble characters who remain faithful. Then, in a moment worthy of high-priced special effects, the leading man puts a seeming end to the story as he is enveloped and transported from view . . .

It's just the end of the beginning.

"Men of Galilee, why do you stand looking into heaven? This Jesus, who was taken up from you into heaven, will come in the same way as you saw him go into heaven" (Acts 1:11).

Don't you just love the appearance of the angels? They are God's voice narrating the action so we don't miss the vital truth exposed in the moment. I wonder—are these the same angels who showed up at the empty tomb verifying the findings of the grief-stricken disciples a few weeks earlier?

"Why do you seek the living among the dead? Remember how he told you, while he was still in Galilee, that the Son of man must be delivered into the hands of sinful men, and be crucified, and on the third day rise" (Luke 24:5-7).

God's word—his truth—is spoken by these angels: This Jesus. Will Come. In the Same Way.

This is the first act of the sequel.

If the Gospels are the original words and deeds of Jesus, then the Acts of the Apostles offer the storyline featuring the work and mission of the Holy Spirit and the Church. The disciples who witnessed the Ascension, and the believers-to-come who hear or read these words from the New Testament, are entrusted and charged with promoting the greatest sequel of all time: Spreading and living the Good News of Jesus Christ until He comes again.

The Ascension sets the stage for the sequel—"The Last Days"—until the Second Coming.

Meanwhile, we are all starring in supporting roles in a work that is real and unfolding. This isn't a fiction, or screenplay, or wishful thinking. The time and space that we occupy is a moving trajectory toward Christ's coming again.

Already the final age of the world is with us, and the renewal of the world is irrevocably under way; it is even now anticipated in a certain real way, for the Church on earth is endowed already with a sanctity that is real but imperfect. Christ's kingdom already manifests its presence through the miraculous signs that attend its proclamation by the Church [Cf. Mk. 16:17-18, 20].(Catechism of the Catholic Church, par. 670.)

And while all this talk of the Church's role in carrying on the work of the kingdom in this glorious sequel is important—in that we see the necessity of the Christian mission—it is imperative to realize that Jesus' Ascension never signaled a departure or separation from the first disciples or his Church on earth today.

Jesus' Ascension was a needed turning point in God's plan so to bring on this final age—the one in which we still live. His leave-taking ascent ushered Jesus to his exalted majesty, seated at the right hand of the Father.

Further, it opened a new way for him to fulfill his promise, "I am with you always (Mt. 28:20)." Pope Benedict XVI explains it in his second installment of Jesus of Nazareth.

The departing Jesus does not make his way to some distant star. He enters into communion of power and life with the living God, into God's dominion over space. Hence he has not "gone away", but now and forever by God's power he is present with us and for us. In the farewell discourses of Saint John's Gospel, this is exactly what Jesus says to his disciples: "I go away, and I will come to you" (14:28). These words sum up beautifully what is so special about Jesus' "going away", which is also his "coming", and at the same time explain the mystery of the Cross, the Resurrection, and the Ascension.

His going away is in this sense a coming, a new form of closeness, of continuing presence . . .

Because Jesus is with the Father, he has not gone away but remains close to us. Now he is no longer in one particular place in the world as he had been before the "Ascension": now through his power over space, he is present to all—throughout history and in every place. (p. 283-284.)

Yeah, I like the sequel, big time. Cue the Holy Spirit.