A Capital Fourth of July 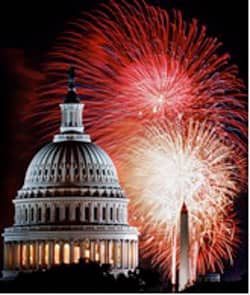 In 2005, my husband, Ed, was asked to speak on a panel at the Heritage Foundation in Washington D.C. The event would be our first visit to our nation's capital, so we decided to make a vacation of it. Ed's mother and sister came along, and we were there over the 4th of July. It was one we will never forget!

This was one time I was thankful that I had seen photographs of many of these historical buildings and monuments when I was sighted. I could picture in my mind what they looked like. Otherwise, I don't know if I could have been able to get a perspective of Lincoln's Memorial, and I think it is difficult to take in even for those with sight!

We walked through the Mall, spending time at each War Monument. At the World War II memorial, Ed looked up his great uncle who died in the Merchant Marines. Approaching the Vietnam memorial, I asked Ed to look for the name of the son of friends of my parents. I remember as a little girl going with my parents to that funeral with the flag-draped coffin with an Honor Guard standing at either side. I only vaguely remember Billy, but I do recall that he was a very nice teenager who tried to keep me amused with magic tricks while our parents visited. Even at my young age, his funeral made a strong impression on me.

Walking through Arlington Cemetery was a sobering and emotional experience. Those who fought and lost their lives in defense of our nation should never be forgotten. May God bless them, and all our troops, here and abroad, who make such sacrifices for us, as well as for their families.

We also visited Gettysburg. That was the first and only Civil War site I have ever had the privilege to visit. I have always enjoyed history, and not just for facts and dates. I especially want to learn as much as I can of what it might have been like to live through it for those who were there. What did they experience, feel, hear, and think? I had read the history books, and heard documentaries, but nothing can replace actually being there. Gettysburg covers an even more expansive area than I had realized. I tried to imagine the sights, sounds, and smells of that battle. I'm sure that even with the vivid, detailed descriptions given by our excellent tour guide, I could not get a full picture of what that would have been like.

On the 4th of July, we began the day with a stop at the Pentagon. It was closed except for those on duty keeping guard. Back then, Ed was writing his Captain's Quarters blog, and one of his military readers, who worked there, graciously offered to give us a private tour. What an honor!

What stood out to me most was going into the 9-11 memorial room, where the plane hit the Pentagon. We were struck with reverent awe. Our guide told us a few stories of that day. One I recall was of an employee at the Pentagon who was on vacation that day, and his office would have been right in the path of the plane. In an almost unthinkable twist, he happened to be a passenger on one of the planes that hit the Twin Towers.

September 11 is a day that is seared into my memory. I recall exactly where I was and what I was doing as I heard the radio accounts unfold. Being in that memorial room brought it all back, and it made September 11 even more personally unforgettable. We prayed there in silent respect for all those who were lost that day, for their families, and for our country.

We also went to Mt. Vernon, and because it was the 4th, Revolutionary War re-enactors were "fighting" in a field near George Washington's beautiful home. To actually be there was such an incredible opportunity. Topping off the day, we had booked a trip on a boat that went down the Potomac by the Lincoln and Washington Memorials to watch the fireworks. I admit that was one time I especially wished that I could actually see the fireworks going off over our nation's capital. I tried to imagine it in my mind, though, as I heard the blasts and reactions of those around me.

We did many other things on our visit, and Ed and I have been back to D.C. since, but that 4th of July will always be very special. I am proud of my country, and can't help but get emotional when I hear "God Bless America" or the National Anthem. Things aren't perfect, but we have been a very blessed country with a rich history. When things aren't going well, Americans roll up their sleeves and try to make it better.

There is much work to be done, and we need to never take for granted our freedoms and our dedication to liberty; everything we have has been attained by the sacrifices and discipline of all who came before us.

It is our responsibility in return to make the sacrifices necessary to keep these same freedoms in place, for future generations. It is also important to teach our children.