The Friends We Keep: An Overview 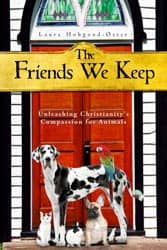 As Christians embrace environmental causes as moral and justice issues, a growing number are also looking to extend that concern to animals. In her new book The Friends We Keep: Unleashing Christianity's Compassion for Animals (Baylor University Press, October 1, 2010), Laura Hobgood-Oster asks if Christianity is also "good news" for animals. She argues for extending the full force of Christian hospitality and compassion to all creatures.

"We rarely, if ever, consider the impact of our religious beliefs on animals, or the impact of animals on our religions," says Hobgood-Oster, a professor of religion and environmental studies at Southwestern University, and a dog rescue volunteer in Georgetown, Texas. "Yet religious traditions have much to offer if humans want to live differently with animals."

Hobgood-Oster plumbs Christian history and tradition, finding a wealth of evidence that animals are indeed good and worthy beings in God's creation. Stories abound of animals: they are beloved companions to the saints, they surround Jesus at his birth, and are essential characters in other important narratives in Scripture.

Stories and legends of the saints, who with amazing frequency are accompanied by animals, are a significant source of information about the place of animals in the Christian faith. The story of Saint Francis's love of animals is well-known. Other examples include Martin de Porres, the 16th-century Peruvian saint who established an animal shelter for stray and abused dogs and cats; Jerome, one of the early church fathers, who befriended a lion; and Brigid of Ireland, whose love of animals is central to tales told throughout the Celtic Christian community.

Hobgood-Oster shows how the Christian understanding of God as a God of relationship is not limited to human beings. "God likes company and is in a relationship of friendship with all animals as well as humans," she says, pointing to Psalms, Job, Genesis, and other books in the Hebrew Bible that place God in firm companionship with animals.

Examining the different roles and uses of animals -- as pets, as food sources, in sport or entertainment, and as co-inhabitants of this planet -- Hobgood-Oster looks at ways individual Christians and faith communities can respond to the needs of animals now:

Fighting pet overpopulation: An estimated 6 to 8 million dogs and cats enter facilities each year in the U.S., and approximately half of these are euthanized. "It is difficult to imagine a Christian theology that would find such a situation acceptable," she writes.

Taking a public stance against puppy mills: "Helping to end the cruel, profit-driven mass production of puppies undoubtedly falls under the umbrella of Christian compassion and reverence for life."

Welcoming animals to church: Some churches plan special worship times and places for people to bring dogs to church, and increasing numbers of churches hold blessings of animals, usually on the Feast of Saint Francis (October 4).

Rethinking the use of animals for sport and entertainment, especially in "blood sports" such as thoroughbred racing, dogfighting, and sport hunting, which are contrary to Christian principles of compassion and nonviolence. She points readers to the rich history of Christian critique of unnecessary violence and suffering, including the founding of the SPCA in England in the 19th century, and the work of William Wilberforce, one of the Clapham Evangelicals, who strongly opposed animal baiting fights.

Eating mercifully: Factory farming perpetuates pain and suffering on an unfathomable scale: "When tens of billions of animals suffer cruel deaths annually and only after living painful and distressed lives, it is an imperative for Christians to refuse to participate in the system."

Offering hospitality:  Treating animals as our neighbors in the creation by not encroaching on their homes, leaving forests standing, wetlands intact, creating spaces for animals who have already been displaced, and providing sanctuaries or wilderness preserves.

The Christian tradition has many resources for a theology of compassion for and connection to animals, Hobgood-Oster shows. "At its core, Christianity is a religion of compassion, of solidarity, of hospitality, of communion and of justice," she says.

The call to Christians for radical hospitality in the twenty-first century encompasses many species, not just humans. Just as early Christians broke traditional concepts of hospitality by eating with those who were considered unclean, so does our time call for a re-examination of the boundaries of hospitality. Other animals -- those faced with the threat of extinction at our hands -- must now be invited into the circle.