June 27, 2011 by Max Lindenman
"Like" the Patheos Catholic Page on Facebook to receive today's best commentary on Catholic issues. 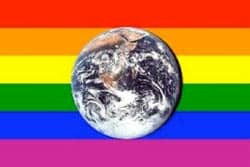 New York Governor Andrew Cuomo's legalization of gay marriage was your basic dog-bites-man story. The only surprise was the governor's choice of words to justify his decision. Plucking them straight from the catechism, he told reporters, "We've reached a new level of social justice." I expect we'll be hearing from Glenn Beck on that.

More predictable was the disapproval of New York's Catholic bishops. Almost immediately afterward, they released a statement that included the following passage:

We strongly uphold the Catholic Church's clear teaching that we always treat our homosexual brothers and sisters with respect, dignity and love. But we just as strongly affirm that marriage is the joining of one man and one woman in a lifelong, loving union that is open to children, ordered for the good of those children and the spouses themselves. This definition cannot change, though we realize that our beliefs about the nature of marriage will continue to be ridiculed, and that some will even now attempt to enact government sanctions against churches and religious organizations that preach these timeless truths.

In some ways, their statement about always having "treated our homosexual brothers with respect, dignity and love" is true—at least when you compare the Catholic Church to her competitors. Unlike many evangelical groups, she hasn't endorsed reparative therapy, at least not formally or consistently. Unlike James Dobson, she hasn't claimed to find gay-friendly messages embedded in popular children's shows. (When someone shows me a headline reading "Dora a Lesbian, Says Chaput!", I'll retract.) If these were the only shows in town, along with Islam and Orthodox Judaism, Catholicism would win the progressiveness prize hands down.

But of course they aren't. The new gay-friendly mood in the country—and, according to the Public Religion Research Institute, among Catholics themselves—will make it excruciatingly difficult for the Church to sell gays and lesbians of her program of a solitary, sexless life.

In the past the Church could take the indirect route, promoting social and legal obstacles toward leading an open, fully realized gay life. This was the gist of the documents issued by the Congregation for the Doctrine of the Faith throughout John Paul II's papacy. I doubt anyone put it quite like this, but the hope seems to have been that if staying in the closet, or at any rate not having sex, represented the path of least resistance, then gay people would take it. Events have proved this strategy to be about as visionary as the Maginot Line.

So much for coercion. All that remains is persuasion. I'm really curious to see whether the Church will even have the stomach to try it. Mother Teresa once said it was fashionable to talk to the poor but not with them; the same could be said of gays, with both greater accuracy and good reason. Try telling a person who's free, of any race, and 21 that he or she is intrinsically disordered: you'll be lucky to escape with your teeth.

Many prominent churchmen seem unaware that such a challenge exists, much less of its importance. Circling the wagons, spelling out Church teachings in the boldest letters possible, seems to be their only priority. One particularly self-defeating example of this kind of reactive tub-thumping is the Manhattan Declaration, a "Call to Christian Conscience" signed by leaders of various denominations, including a number of Catholic bishops. It includes the line: "We acknowledge that there are those who are disposed towards homosexual and polyamorous conduct and relationships."

Though carefully couched in terms of a sportsmanlike concession, it really means to impute guilt by association. It equates homosexuality, which few Americans find shocking or exotic, with polyamory, which—I have faith—most Americans do. Worse, it equates the widely accepted (though unproven) case that gay inclinations are a matter of nature, not nurture, with the case for an inborn tendency toward polyamory, which has never been made. Imagine trying to discredit Gandhi by naming him alongside Hitler as a vegetarian foe of the British Empire, and you'll read the spin right. Gays and lesbians will not recognize themselves as the declaration's drafters present them. (Neither, I suspect, will polyamorists.)