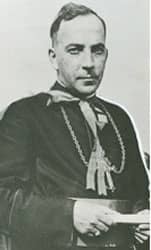 In 1892, as America was preparing to celebrate the 400th anniversary of its discovery, Austin and Elizabeth Ford were preparing for their sixth child. When a son arrived on January 11th, they considered naming him Christopher Columbus Ford. But Austin had just finished reading a biography of St. Francis Xavier (1506-1552), whom he had come to admire, so the baby boy was named for the great missionary saint whose unrealized ambition was to reach China.

A native New Yorker, Austin Ford published The Irish World. Born in Iowa, Elizabeth Anne Rellihan had moved East to write for the paper; within a year, she and Austin were married. Theirs was a comfortable, middle-class existence in Brooklyn. Young Frank had many career options ahead of him. When he was 12, an Irish priest visited his parish to raise money for the missions, and talked about his work in China. The seeds of a vocation had been planted; Frank Ford decided he would be a Chinese missionary.

But back then there were few opportunities for American Catholics to engage directly in missionary work. (Until 1908, the Vatican officially listed the United States as mission territory.) Frank enrolled at Cathedral College, a Manhattan school for young men considering the priesthood. In 1912, during his sophomore year, an opportunity presented itself when Fathers James Walsh and Thomas Price came to Cathedral looking for young men to join their new community, Maryknoll.

A year earlier, the two priests founded America's first missionary order in Ossining, New York, on a hill named for the Blessed Mother. Frank Ford was their first applicant. Of slight build, with black hair and striking dark eyes, he was shy, but no shrinking violet. In 1918, a few months after his ordination, he was one of the first Maryknollers assigned to China, at Guandong in the south.

Like his fellow priests, he knew little of Chinese culture and traditions. He would learn on the job. More experienced European missioners predicted that the Americans wouldn't last a year. It was indeed hard work. They faced rough, slow travel through terrible heat and humidity replete with mosquitoes. There was political unrest. Locals mocked their attempts at Chinese. Still, Ford wrote,

I'm only just now discovering the civilization of China and falling on love with it . . . To think that China was completely equipped with a literature and culture 3,000 years before our ancestors was a hard blow to an Irishman.

Too many Westerners, he noted, felt the Chinese were there to serve them. Later he would tell his own priests: "We come to China not to barbarians, but a civilization thousands of years older." Condescension, he insisted, had no place: "Our Lord never condescended; He never betrayed superiority in His dealing with others." For Ford, the encounter with the Chinese was to be one of "reverence, respect, and love, a meeting of brothers."

For many back home, there was glamour about the missions. But, Ford commented, "the routine is without glamour." There were warlords, bandits, and pirates. Communism under Mao Zedong was gaining ground, and there were anti-foreign demonstrations. For many Chinese, conversion to Christianity was a hard thing. It meant adopting a religion closely associated with the Westerners exploiting their country.

In 1935, Father Ford was named a Bishop in China. He took as his episcopal motto Condolere, meaning "to have compassion." His mission program was years ahead of its time: lay catechists, native vocations, and women religious directly engaging in evangelization. Because sexes were strictly segregated, only women could reach out to other women. Hence it was they who preached the Gospel. Women, Ford believed, offered the only "real progress for the Church in China."

As bishop, he lived in a simple farmhouse, in a tiny room with his books stacked on a chair. He rarely wore the trappings of office. Once when a new American missionary addressed him formally, he replied, "None of this 'Excellency' business." His one vice was a pipe, and a peer notes that his "consumption of tobacco was enormous. In his discussions his pipe was indicative of his mood."

In China the Maryknollers ran churches, schools, hospitals, and orphanages. Beginning in the 1930s, they labored under threat of Japanese occupation. During the Second World War, American officials advised Bishop Ford to leave, but he refused. Although they were tough years, he had high hopes for the postwar era. Sadly, he proved to be wrong, as the struggle for China now continued between Chiang Kai-Shek's Nationalists and Mao's Communists.