Newman's Road to Rome, Part One

June 27, 2011 by Pat McNamara
"Like" the Patheos Catholic Page on Facebook to receive today's best commentary on Catholic issues. 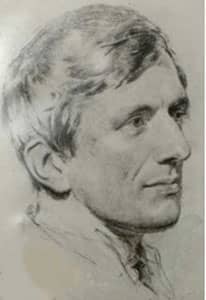 Because he was one of the leading religious thinkers of the 19th century, Cardinal John Henry Newman's beatification by Pope Benedict XVI in October 2010 was a long awaited event for Catholics and non-Catholics alike. A poet, theologian, novelist, apologist, and pastor, as a convert he authored one of the greatest spiritual autobiographies in English, Apologia Pro Vita Sua (1864).

Born to a Protestant middle-class English family on February 21, 1801, he was the oldest of six children. A gifted student, he entered Oxford at only 15 years of age. Newman briefly considered a secular career, but chose the ministry instead. Ordained at 23, he served in a parish before being appointed a Tutor at Oxford's Oriel College, which provided a comfortable living in a fairly congenial academic setting. The future looked bright for Newman.

Soon thereafter, Newman was appointed Vicar of St. Mary's, Oxford's university church. There he achieved a reputation as one of the day's foremost preachers. A contemporary recalled one sermon:

Newman had described closely some incidents of our Lord's passion; he then paused. For a few moments there was a breathless silence. Then in a low, clear voice, of which the faintest vibration was audible in the farthest corner of St. Mary's, he said, "Now I bid you recollect that He to whom these things were done was Almighty God." It was as if an electric stroke had gone through the church.

As for his educational work, he considered this pastoral ministry. Through his writings he was becoming an authority on early Church history. Tall but slightly stooped, at five foot nine, Newman may have not have made an impressive figure, but he did make an impression on people, especially the young. One Oxford graduate recalled:

In Oriel Lane light-hearted graduates would drop their voices and whisper, "There's Newman," as with head thrust forward and gaze fixed as though at some vision seen only by himself, with swift, noiseless step he glided by. Awe fell on them for a moment almost as if it had been some apparition that had passed.

As increased government control threatened the Anglican Church's prophetic role, Newman led a movement to reclaim it, known as the Oxford Movement. The Church, he believed, had "a Divine appointment" independent of the state "with rights, prerogatives, and powers of its own." A major concern was that Bishops were being appointed for political rather than religious orthodoxy. The Church wasn't worth much, Newman wrote, "if she is to be nice and mealy-mouthed when a piece of work is to be done for her good lord the State."

For members of the Oxford Movement, the Church of England was a middle way (Via Media) between Puritanism, which discarded ancient traditions, and Roman Catholicism, which corrupted them. Only the Anglican Church was truly Catholic, in the sense of universally applicable. As they reexamined Marian devotion, the roots of the liturgy, and the sacrament of confession, some felt they were veering too close to Rome. In fact a growing number, many of them Newman's friends and students, did convert.

Newman himself was raised to believe that Rome was the Antichrist predicted in scripture, but he also opposed "ultra-protestantism," which discarded everything Roman. His own reading and study was leading him to a different direction than originally intended. To justify the Via Media position, he had gone back to early Church history.

Little by little, Newman's objections to Roman Catholicism were breaking down under extended examination. "Catholicism," he would later write, "is a deep matter—you cannot take it up in a teacup." He was coming to see it, rather than his own Church, as the true successor to the Apostles. There was nothing, he insisted, "which the Church has defined or shall define but what an Apostle, if asked, would have been fully able to answer." As his objections disappeared, he moved closer to converting.

On October 9, 1845, at age 44, John Henry Newman was finally received into the Roman Catholic Church. His Anglican life was ended. "I am going to those whom I do not know," he wrote, "and of whom I expect very little—I am making myself an outcast, and that at my age." It was a sacrifice in which he felt "no pleasure."