Not Conservative, Not Liberal: Progressive

When it comes to fuzziness and flimsiness, the progressive Christians I know are making great strides beyond old liberalism. What initially seemed like a morass of complexity—the quest(s) for the historical Jesus, biblical criticism, revisioning the Bible's inspiration and authority—is turning out to be highly productive. The scholarly process just needed some time to mature. As a result, Progressive Christians aren't disregarding the Bible; they're studying it even more diligently than their conservative counterparts, and they're producing sparkling, challenging, inspiring theologies rooted in the Bible. Fueled by this renewed biblical engagement, they aren't simply functioning as the religious chaplains of the Democratic party (as their counterparts have often been for the Republican party); they're articulating a vital political theology and a vigorous theological politics that challenges everybody to seek the common good.

Nor are the Progressive Christians I know proud. If they come from conservative backgrounds as I do, they've been beat up pretty bad on their way out and so they're not interested in doing unto others as they have been done unto. And if they come from liberal backgrounds, they've seen the bankruptcy of certain forms of institutional, compromised, culturally accommodated faith. They're not proud of where they are; they're excited about where they're going.

And as for dying, I guess only time will tell. It is a moment of opportunity for Progressive Christianity, I'd say. My sense is that Evangelicalism is in a contraction process, playing to its right wing much the way the Republican party is. And Catholicism seems to be doing something similar, working for a "smaller, purer church" in which less diversity of thought and practice are permitted (at least in the short run; I know that Catholics are masters of the long view). And the historic black churches are often (not always) stuck with two unacceptable options—nostalgia for the Civil Rights era or wholesale sell-out to the Prosperity Gospel.

The Latino and Asian churches have exceptional vitality, but are often (not always) caught in the immigrants' dilemmas: where is the line that separates our ethnic identity from our faith identity, and what will happen as future generations assimilate more comfortably into mainstream American culture? And mainline Protestant churches are—perhaps for the reasons Evangelicals claim, but I think for other reasons—aging and dying (or wrinkling and shrinking, as they sometimes say). Spreadsheets tell them that their future must be different from their past and present.

All that's to say that the right kind of Progressive Christian movement could welcome thousands and thousands of Christians who don't want to contract into more rigid conservatism, live in nostalgia, play the Prosperity Gospel game, keep sinking institutional ships afloat, and so on. But that will only happen if Progressive Christians can make it clear they aren't simply yesterday's warmed-over liberal Christians with a new label.

Perhaps the most promising possibility lies with the thousands of SBNRs (spiritual but not religious) who are waiting for something very much like Progressive Christianity to emerge and get down to business. By "business," I mean the sacred endeavor of loving God and neighbor, stranger, alien, outsider, outcast, and enemy. I mean the work of healing our broken world, the vocation of doing justice, loving kindness, and walking humbly with God. I mean the spiritual work of forming Christ-like people, and the social enterprise of seeking the common good, beginning with the last, the least, and the lost. Moving forward, little by little, in the robust organic process of God's will being done on earth as it is in heaven—that's the progress that Progressive Christianity is about.

Related articles by or about Brian McLaren at Patheos:

"Naked Spirituality and The Other Jesus: A Conversation between Brian McLaren and Greg Garrett"

Jesus Was a Jew
Kermit Zarley
3 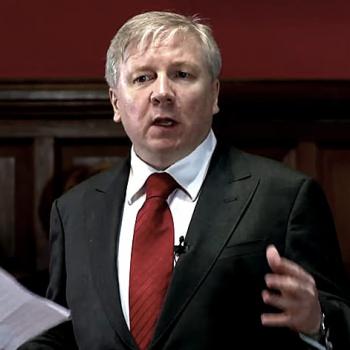 Take Care of Yourself
Hebrew College Wendy Linden
About
Get Patheos Newsletters
Get the latest from Patheos by signing up for our newsletters. Try our 3 most popular, or select from our huge collection of unique and thought-provoking newsletters.
From time to time you will also receive Special Offers from our partners that help us make this content free for you. You can opt out of these offers at any time.
see our full list of newsletters