A President's Faith Matters: An Interview with Warren Cole Smith

Editor's Note: On May 24th, Warren Cole Smith's article, "A Vote for Romney is a Vote for the LDS Church," appeared in a symposium on faith and the future of social conservatism, and at Patheos' Evangelical Portal. It provoked an enormous response both from commenters at Patheos and from political commentators around the country. Smith, an accomplished journalist and publisher, agreed to address some of the criticisms in this interview. 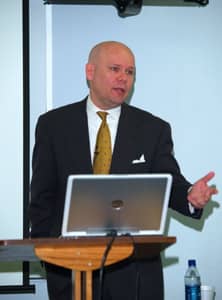 Have you been surprised by the response your article has received?

I was pleasantly surprised, for the most part. A few of the responses have been nasty and personal. I want to be clear that the really nasty ones, as near as I can tell, have not come from Mormons. In fact, one guy went out of his way to tell me he was not Mormon before he unloaded a profanity-filled rant. A few others seemed not to care or not to understand the points I was trying to make, but many others have been cordial and even helpful. I welcome the give and take, and I don't mind the controversy. In fact, I probably enjoy it more than I should.

I would add, however, that among the comments that have been least helpful have been those coming from the LDS church itself. My words have been taken out of context and my positions mischaracterized. If I really said some of the things that they accuse me of saying, I wouldn't believe me either.

Some have accused you of bigotry. Is there any way to convince people you're not bigoted?

First of all, the word "bigot" is an ideologically charged word. It's an ad hominem attack, not a true argument. I don't mean to be dismissive or glib, but I have trouble taking the charge seriously, and little motivation to defend against it. If my ideas are false, then expose the falsehood. I'm perfectly happy to let my arguments fight it out with theirs. The truth will win. I'm not saying that there aren't true bigots out there—religious, racial, and otherwise. Too often, however, words like "bigot" are used by people who can't muster a true argument.

Can you clarify how you came to your views on Mormonism?

What I think is causing the problem here is that Mormons like to assert that they are Christians "just like us." They often tell me, "We worship the same Jesus you do." It is to these assertions that I am saying, "Well, no, that's just not true."

What's interesting to me is that Mormons who really understand what their church teaches agree with me. They know their doctrine is different. They know the Jesus they worship is not the Jesus worshipped by Protestant, Catholic, and Orthodox Christians. I will sometimes ask a Mormon: "If your religion is no different from mine, if we truly believe the same things, would you be okay with your children and grandchildren becoming Baptists, or Presbyterians, or Catholics?" No serious, faithful Mormon would answer yes to this question.

As for my experience with the Mormon Church: I've lived in the Mountain West, where the Mormon percentage of the population is higher. I've been involved in the Boy Scouts at the regional and national level, where the influence of the LDS church is strong—and, I would quickly add, positive. These experiences have given me a long interest in the church. I've read not all but significant passages of The Book of Mormon, the Pearl of Great Price, and Doctrine and Covenants. My friend and former TIME Magazine religion editor Richard Ostling's book "Mormon America" has also been a help to me. I've also been involved in evangelism and Christian apologetics for years. Understanding the Mormon faith has been a part of that training and education.