St. Francis, My Father, and Me

His taste for the finer things, once a source of pride, began to look like ostentation. The stuff—the pricey gadgets and objets with which he filled the Upper West Side apartment he shared with his new wife—looked like a kind of Berlin Wall, built to keep me at a distance. One of the few friends I brought over earned my father's undying wrath by standing, in dirty, bare feet, on a chamois rug he and his wife had picked up on a trip to the Pyrenees. "Make yourself at home" was no longer an imperative.

Over the next two years my indolence and his territoriality both grew, seemingly in direct proportion to one another. At the end of junior year, I dropped out of school, arranging to earn my GED by completing a series of internships. My weekends with my father began and ended in seething silence. One evening, about a month before my 18th birthday, I showed up in a typically foul mood, and found him—typically—in an identical state. Growling hello, I pushed past him into the kitchen, and proceeded to pour myself a glass of orange juice.

"Hey!" he shouted, in a tone that might have sounded imperious on a construction site. "That's our orange juice." The possessive pronoun referred to himself and his wife.

Such a small thing to begrudge, I thought, slamming the glass down on the kitchen counter. Enraged as much by the offense against his glass as anything else, he grabbed me by the shirt and dogged me into the next room. We grappled and cursed, and the next thing I knew, I'd laid him out flat with a right cross and a right uppercut.

I am horrified to say I was not horrified. I am now, as I tell the story; but at the time, and for many years afterward, all I felt was triumph. Those were the first real punches I'd ever thrown, and I'd scored a knockout. The young George Foreman could have done no better. I remember leaping over his body on the way to the door, relieved that I'd never have to deal with him again.

In a perverse way, it was my St. Francis moment.

Except, it wasn't. By who knows what quirk of nature, my father could tolerate a violent son more than Pietro di Bernardone could tolerate a generous one. And he proved most generous in his own right with the one resource Pietro guarded most jealously. With my GED, I squeaked into a third-rate college; my father paid my way. When, after dropping out of grad school forced me into a series of minimum-wage jobs, my father sent me $500 per month. Thanks to him, I never had more than a nodding acquaintance with Lady Poverty.

If my declaration of independence was abortive, so was our reconciliation. During my undergrad years, when I was earning As, we related with something like our old ease. Later, when I began to struggle again, up flew the wall once again. My failure, to borrow a phrase from Brokeback Mountain, was something my father could neither fix nor stand; so he stepped back and stared at it, horrified, from a safe distance.

And then he died—just about that suddenly, too. I was 30, and had just graduated from a job making $9 per hour plus bonuses at a crooked telemarketing firm to one earning 40 percent commission at an even more crooked mortgage brokerage. I can't say for sure whether he saw it as a step up, but I pitched it as one, and our phone calls became cheerier than they'd been in years. I don't suppose it's too much to hope that he died feeling a little less worried than usual.

At the time he made it, his gift of the tau seemed inconsequential. I managed to keep it only until sophomore year of college, when it disappeared. (Probably, the rope broke without my realizing it.) But whenever I think about my father and me, and our shared genius for disappointing each other, that moment stands out like a shiny coin at the bottom of a mud puddle. It makes me hope some part of him understood that fathers and sons are made to disappoint and renounce each other. The fact that he and I never carried our mutual renunciation as far as Francis and Pietro carried theirs—he never had me arrested; I never stopped calling him "Father"—probably shows just how firmly we both grasped this. Whatever else each failed to get about the other, we both knew we were in for a rough trek.

Don't ask me what he'd have had to say about my becoming Catholic. I'm guessing he'd have gone through a series of Kubler and Ross-type stages: denial, followed by disdain, followed by amusement, followed by acceptance, culminating in some outsized, inappropriate gift—like a trip to Rome—to mark my baptism. With some mortification, I'd have accepted—I've never turned down a travel junket in my life. And if I'd thought through our lives as carefully as I have in fact, I'd have wanted him to come with me on a side trip to Assisi, where we could venerate the patron of all trying sons.

Defending My Politics with My Faith Part 4: Immigration
Shane Phipps
2

Hoodoo How We Do: Psalms Are Spells
Lilith Dorsey
3 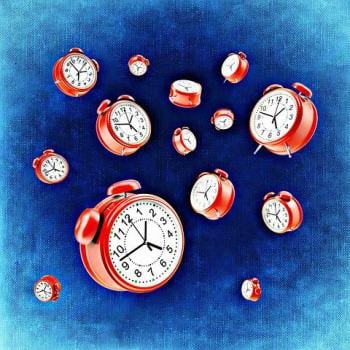 I Like Time Changes! So sue me.
Vance Morgan
Get Patheos Newsletters
Get the latest from Patheos by signing up for our newsletters. Try our 3 most popular, or select from our huge collection of unique and thought-provoking newsletters.
From time to time you will also receive Special Offers from our partners that help us make this content free for you. You can opt out of these offers at any time.
see our full list of newsletters
Editor's picks See all columnists