Taking Class with the X-Men 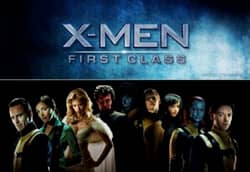 I wish I could claim that my love of literature comes from some deep intellectual place. In reality, it probably comes from my love of comics and science-fiction. I blame Star Trek. Even at its most Shatneresque campiness, in every incarnation the sci-fi classic offers engaging stories.

That is why this middle-aged broad is happy to sit in a darkened theater with her 19-year-old son, riveted to the latest comic book brought to the big screen.

I need some more popcorn.

Modern storytelling gets a bad rap, and that is especially true in the superhero genre. Perhaps that's because the good guys wear their underwear on the outside or the audience is perceived to be aging single guys living in their parents' basements. The latest Marvel, um . . . forgive me, marvel, explores compelling themes we typically associate with literary giants such as Dante or Shakespeare, and I found myself being drawn to the epic nature of the themes: the struggle between good and evil, the characters' internal struggles with their brokenness. At their very core, these stories explore the human condition, and that story—our story—is often dark. The superhero genre flirts with nihilism without fully embracing it, and this is true in X-Men: First Class, but always dancing around the pit of despair is the bright light of Hope.

While I wouldn't claim that X-Men extols the virtues espoused by our faith, aspects of their story are not just interesting but enlightening, particularly in the relationship between Charles Xavier—the future Professor X - and his close friend, Erik Lehnsherr, who later evolves into his arch-nemesis, Magneto. In this prequel, their morals and destinies are not yet so clear-cut.

In a pivotal scene, Charles helps Erik harness his powers. Erik fails repeatedly because he cannot control his anger. In fact, it is anger that inspires most of his actions. Charles, a telepath, gets into Erik's head, and helps his friend find the serenity to focus. To Erik's surprise, the memory of his mother's love for him comes to the surface and on that, he is able to center his thoughts, and move a heavy object.

Charles, moved by the memory he witnesses, tells his friend he was drawn to the light in the darkness of Erik's mind, noting that love empowers Erik. Indeed, love empowers all of us.

Throughout the film, Erik struggles with the deep anger that motivates his search for Shaw (the man who killed his mother and trained him to harness anger for his superpower). Charles, trying to help Erik channel this passion in a different direction, cannot succeed. "Killing will not bring you peace," he says to Erik.

"Peace," replies his friend, "was never an option."

Fueled by his seemingly bottomless well of anger, Erik pursues revenge over peace. It is a costly choice, both for Charles—who suffers a debilitating injury because of it—but also for Erik, who becomes the very monster he has sought to destroy.

The Catechism of the Catholic Church actually addresses these outsized and destructive passions:

1765 There are many passions. The most fundamental passion is love, aroused by the attraction of the good. Love causes a desire for the absent good and the hope of obtaining it; this movement finds completion in the pleasure and joy of the good possessed. The apprehension of evil causes hatred, aversion, and fear of the impending evil; this movement ends in sadness at some present evil, or in the anger that resists it.

This fundamental aspect of our humanity resonates in all of us. Charles and Erik symbolize the choices we make about our passions, for good and bad. Our actions, in concert with those passions, determine the kind of lives we'll lead.

My choices and how I handle my passions will likely never avert a nuclear holocaust or start a war, but the stakes are nevertheless equally high—they concern my salvation.

Speaking of salvation, as an aside I must comment on the propensity for Marvel comics and films to objectify and exaggerate the charms of the female heroes. It may be true that the males are eye-candy as well—and both male and female geeks may find it gratifying—but we could do without the exaggerated standards of beauty, and the stories would stand alone.

Still, if it takes a comic book to nudge us into pondering the power of love, and the spiritual and physical danger inherent in overfeeding our passions, it is all to the good. A little afternoon diversion at the movies can sometimes serve up much more nutritious food for thought than all that eye-candy might suggest.