Archbishop Chaput: Of the People, Perhaps for the Times

July 24, 2011 by Max Lindenman
"Like" the Patheos Catholic Page on Facebook to receive today's best commentary on Catholic issues. 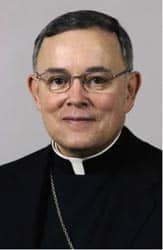 Anyone who doubts that the Most Reverend Charles J. Chaput is a man of the people should spare an ear for the lecture he gave last April at Notre Dame. "There is unity among the bishops about abortion always being wrong, and that you can't be a Catholic and be in favor of abortion," he said. "But there's just an inability among the bishops together to speak clearly on this matter and even to say that if you're Catholic and you're pro-choice, you can't receive Holy Communion."

"Help me," he exhorted his audience, "to convince the bishops on that subject.'

This was no call for mob rule. After all, Chaput was addressing a university crowd—not the sort of people to seize torch or pitchfork, bottle or brick. Nevertheless, he was calling on the laity to correct what he saw as the negligence of the clergy. That's very progressive, in a Lumen Gentium kind of way. When Chaput told National Catholic Reporter's John Allen, Jr., "We're not a tribe"—the "we" meaning clergy—he wasn't kidding around.

If Chaput's strategy shows vision, his mastery of the details hints at an admirable discretion. He serves up red meat, but nothing too raw or bloody. A populist he may be; a demagogue he is not.

To grasp the difference, compare Chaput's relatively modest request to the full-throated cry that emerged this past Lent from Real Catholic TV host Michael Voris. Incensed at a letter circulated by members of Earth Day Network, asking Catholic pastors to devote Easter or Divine Mercy Sunday's homily to environmental protection, Voris denounced global warming as "a scam," whose "intent is to limit population growth through abortion, contraception and sterilization." For recommending the faithful give up plastic bags and incandescent light bulbs, Voris continued, the bishops who make up the USCCB "are going to have to pay for their negligence, in this life or the next."

It may seem to some that, by praising Chaput in comparison to Voris, I am insulting His Grace with the soft bigotry of low expectations. On the contrary, I give Chaput credit for talking to Voris' audience, if not quite in their language, then certainly in language more elevated than Voris' but less equivocal than they've come to expect from bishops. Nothing could be more important today. The style of pastoral letters and Bishops' Conference pronouncements is grave, ponderous, jargon-happy, and full of disclaimers. Is it charitable? Yes. Clear? Insofar as any statements on complex issues can be, yes. Unfortunately, to all but a few patient readers, it has a narcotic effect equal to Demerol's.

This might have flown in the days of vellum, but no longer. If the Church is not a democracy, the communications business is. Carrying a point takes more than good intentions, formal accreditation, and elbow grease; it also takes flash. That Voris is not talking only to himself suggests that a sizable number of Catholics crave a flashier, slicker, more friction-free juncture of Church teaching and conservative politics than may in fact be possible. As Ed Kilgore points out in New Republic, evangelical Christians have televangelist James Robison to damn government as "a blasphemous substitute for God when it comes to picking 'winners and losers.'" Catholics have Michael Voris to damn earth's stewards into hell.

Chaput can reach these people. His credentials as a social conservative are above reproach. Not only does he recommend extending the Communion ban for pro-choice politicians to pro-choice laypeople, he's barred the children of same-sex couples from attending Denver Catholic schools beyond first grade. Squishy positions these are not. With a talent that approaches alchemy, he infuses more or less traditional Catholic verbiage with a Cagneyesque intensity. When Chaput issues a statement to the effect that "Parents living in open discord with Catholic teaching in areas of faith and morals unfortunately choose by their actions to disqualify their children from enrollment," the point stands on its own. It requires no Vorisian embellishments. Less is more.