Becoming Radical Communities of Faith: An Overview of Radical Together 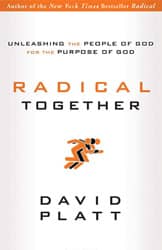 In Radical, David Platt's plea for Christians to take back their faith from the American Dream resonated with readers everywhere, and the book quickly became a New York Times bestseller. Now in Radical Together, the author broadens his call, challenging us to unite around a gospel-centered vision.

How, he asks, might such a vision reshape our priorities as the body of Christ? How might well-intentioned Christians actually prevent God's people from accomplishing God's purpose? And, how can we best unleash the people of God in the church to carry out the purpose of God in the world?

Writing to everyone who desires to make an impact for God's glory—whether you are an involved member, a leader, or a pastor—Dr. Platt shares six foundational ideas that fuel radical obedience among Christians in the church. With compelling Bible teaching and inspiring stories from around the world, he will help you apply the revolutionary claims and commands of Christ to your community of faith in fresh, practical ways.

Dr. David Platt, 32, is deeply devoted to Christ and His Word. David's first love in ministry is disciple-making—the simple biblical model of teaching God's Word, mentoring others and sharing faith. He has traveled extensively to teach the Bible and church leaders throughout the United States and around the world. Atlanta natives, he and his wife, Heather, made their home in New Orleans until they were displaced by flooding following Hurricane Katrina in 2005.

A life-long learner, David has earned two undergraduate and three advanced degrees. He holds a Bachelor of Arts (B.A.) and a Bachelor of Arts in Journalism (A.B.J.) from the University of Georgia, and a Master of Divinity (M.Div.), Master of Theology (Th.M.) and Doctor of Philosophy (Ph.D.) from New Orleans Baptist Theological Seminary. He has previously served at New Orleans Baptist Theological Seminary as Dean of Chapel and Assistant Professor of Expository Preaching and Apologetics, and as Staff Evangelist at Edgewater Baptist Church in New Orleans.

David holds a deep and abiding passion for global disciple-making. "I believe that God has uniquely created every one of His people to impact the world. Some may count it as idealistic, but I believe it is thoroughly biblical, rooted in Psalm 67:1-2, yet covering Scripture from beginning to end. God is in the business of blessing His people so that His ways and His salvation might be made known among all people."

David practices what he preaches through his travel nationally and internationally, teaching from God's Word in churches, seminaries, the underground church or even under a shade tree in Africa or Latin America.

David and his family live in Birmingham, Alabama.

Read what other pastoral leaders are saying about Radical Together at the Patheos Book Club blog.

Discover more resources - including a book excerpt - at the Radical Together Book Club at Patheos.