A Crisis in God's Economy

The numbers involved in the American budget crisis make it difficult to bring into focus. With at least 12 zeros in the baseline figures, they are so mind-boggling as to make the whole issue seem abstract and surreal. But another set of numbers brings the size of the problem down to earth: that is, the numbers of people whose livelihoods are affected by it.

Treasury Secretary Timothy Geithner, making a circuit of the Sunday talk shows in late July, repeatedly used the figure "80 million checks a month" to quantify disbursements from the U.S. government. Some 54 million people receive Social Security checks, about 36 million of whom are over 65. In 2010, more than 47 million people were covered by Medicare. The total number of federal government employees (including military) was more than 4.4 million. The number of contractors whose livelihoods depend on federal government spending has reached 7 million in recent years, although the figure fluctuates. And 4.4 million Americans are on welfare.

Insolvency for the U.S. government could be painfully disruptive for millions of people. That is why it is so hard to make decisions about the problem. If it didn't matter what happened to those people, the decisions would be easy.

There is so much demagoguery about that consideration that we can tend to forget a simple fact: it's true. What matters most about what we do to address our national budget crisis is how it affects people. But it is a grave error to see this point only through the contrived, often self-serving lens of ideology. This issue isn't "owned" by either side of the partisan political divide. Instead, it makes the budget crisis a test of our character and our faith.

It is God who "owns" the question of how we treat people. Long before we were appropriated by ideological partisans, we all belonged to God. His care for our condition and our needs predated every earthly ideology. We cannot care more about each other than He does; we cannot make up systematic "guarantees" that are better than what He wants to do for us.

It focuses our thinking remarkably if we accept that as a given. Is $60 trillion in unfunded entitlement obligations too big for God to handle? On what basis would we suppose that it is? Shouldn't we rather assume that it isn't? Standing before our mountain of public debt, what we know for sure is that we must treat our fellow citizens with the love of Jesus Christ and honor the debt obligations we undertook in good faith. We know it would be wise to at least stop adding to our debt at the rate we have been. Whether we believe these measures constitute a death sentence or a form of hopeful obedience to God depends entirely on who we think He is.

If we have made mistakes in our arrangements for government and fiscal management, will God help us to correct them, or will He stand by and laugh at our travails? And if we want His help, should we appeal to Him on the basis of complaint, blame, and punishment, or should we think in terms of obedience, promises, and overflowing bounty? On many occasions in the Old Testament, God blessed the Hebrews far beyond their expectations when they were humble and obedient. Even when they were at their human worst, He honored the promises He had made to their fathers. Will He do less now, when there is no longer any condemnation of those who are in Christ Jesus?

I believe it is possible to envision methods by which we can honor America's debt, and even fulfill our entitlement obligations, without despairing about the quality of our future. There is a great deal of productive economic activity that regulation and taxes now discourage (or prohibit outright). Lightening our regulatory load would—besides doing obvious things like opening up oil and gas development—be particularly encouraging to small-business formation.

Some federal lands could be sold for commercial development without imperiling our national heritage. Putting Social Security and Medicare reforms on the calendar, so that younger generations can plan for them, could be done without jeopardizing the obligated benefits going to our current seniors. These are just a few ideas; the central point is that we need to think in terms of growing out of our fiscal problems rather than impoverishing everyone to accommodate them.

With millions of Americans unemployed, and much of our national work effort going to regulatory compliance and administration rather than to production, we are nowhere near the limits of our capacity to produce, prosper, and pay down debt. Spending less will have to figure large in our plan to regain solvency—especially with federal tax receipts down 13 percent since 2008 due to the recession—but spending less is a negative approach. It is not a method of generating opportunity and optimism. Those will expand with economic growth and government reform.

It is natural to feel paralyzed by the scope of America's fiscal problems. But in God's economy, they are small and transient. It might seem counterintuitive at the moment to prescribe focusing on seemingly narrow principles like how we treat people. We have become addicted today to systematizing everything, making grand and gloomy predictions as if our ability to multiply numbers confers on us mastery of the future. But we don't even know what will happen tomorrow. Perhaps the greatest humility we could show is acknowledging before God that we don't know what the outcome will be in the matter of our national debt—but we trust Him to uphold and bless us if we will do the simple things we know to be right.

Amma Theodora, Gnosticism, And The Goodness Of The Body
Henry Karlson
3 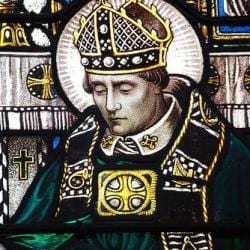 Hilary of Poitiers (d. 367) vs. Sola Scriptura as the Rule of Faith
Dave Armstrong
4

My Response to Father Stephen Imbarrato's Libel
Mary Pezzulo
Get Patheos Newsletters
Get the latest from Patheos by signing up for our newsletters. Try our 3 most popular, or select from our huge collection of unique and thought-provoking newsletters.
From time to time you will also receive Special Offers from our partners that help us make this content free for you. You can opt out of these offers at any time.
see our full list of newsletters
Editor's picks See all columnists