Hard-Wired: Fiction and Physics in the Stories of Ted Chiang

July 06, 2011 by Julie Davis
"Like" the Patheos Catholic Page on Facebook to receive today's best commentary on Catholic issues. 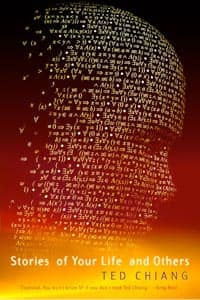 Anyone who has ever read even a few of Ted Chiang's science fiction stories knows that he is fascinated by questions of science, religion, and what it means to be human.

The pickings are slim, though: Chiang is far from prolific. By trade a technical writer, he is famous for the long periods that go by between stories. But he's worth waiting for. His fiction has won a string of prestigious awards.

Chiang is relentlessly logical. He shines a glaring spotlight of truth toward whatever subject has caught his attention. Pondering the story of the tower of Babel led to "Tower of Babylon," a look at Babylonian worldviews, engineering, and heaven's physical proximity to earth. Considering angels, natural disasters, and the Book of Job resulted in "Hell is the Absence of God," in which Chaing presents one of the bleakest views of religious faith I have ever read, along with great insight into the atheist's point of view.

Chiang's interest in variational physics coupled with a friend's comment about her newborn led to "The Story of Your Life," which is not only a unique alien first-contact story but a glimpse of what our free will means, how God can see the future from outside time, and how much he loves us.

These stories and more, collected in Stories of Your Life and Others, reveal something of mankind's faith. Chiang, interestingly for someone so inclined to include religion in his work, is an atheist. However, his grasp of both logic and human nature brings forth insights that ring both true and false. Which stories are true and which are false depends upon which side of the faith spectrum you fall. Chiang writes stories that variously conclude God does exist or does not, that He is kind or cruel, that faith matters or doesn't.

Chiang's stories are unique gems of storytelling. As with the finest science fiction, his imagination is boundless - his fully realized worlds are unforgettably depicted, and the reader is pulled into exploration. These worlds are populated with characters whose struggles and desires echo our own.

Chiang's investigations into religion and humanity make the thoughtful reader delve deeper into his or her own beliefs. If I disagree with a story's conclusion, I examine my own opinions and personal experiences to discover Chiang's flaw. Conversely, when I realize the depth of the insight in a tale like "The Story of Your Life," I am stunned and moved.

The hard science upon which Chiang's stories are built can be challenging—I admit to sometimes skimming the deep science when it bogs me down—but they are worth the effort required.

All this brings me to Chiang's latest and longest work, the Hugo-nominated novella, The Lifecycle of Software Objects.

After the zoo she worked at closes, animal specialist Ana Alvarado is hired as a trainer/psychologist to care for a group of "digients," virtual pets designed for a virtual-reality world. These pets have artificial intelligence and the ability to develop personalities and wills as they interact with their owners. Derek Brooks designs the avatars for the digients. Ana and Derek each adopt some digients which—as they grow up—become relevant characters. The story is told in small vignettes spaced several months or a year apart. Thus readers get to see the developmental dynamics of the digients and their owners over time. When the virtual-reality-pet fad fades, Ana and Derek struggle to find ways to keep their digients functioning and growing.

The reader can easily extrapolate this to our computer-and-video-game-obsessed culture. What Chiang does, however, is set up parallels between the humans' development and the digients' development. Ana and Derek's efforts are not only about maintaining the virtual environment, but also nurturing their digients' needs as growing, developing life forms. We become aware that the fallible humans in the story also have "software" that is developing. The reader identifies with themes of personal growth, parenthood, and families. Questions about artificial intelligence crossing the line into true life—lived for its own sake—lead to reflection about creation and creator, free will and existing "outside of time," as well as access to the "tree of knowledge."

Chiang's latest work may be his most accessible and also may be the entry that tempts readers into his other short stories, all of which are richly rewarding. It is a short work but one that repays the time spent a hundred-fold.

The Lifecycle of Software Objects is available free online right now so that it can be read by those who will vote in the Hugo Awards.