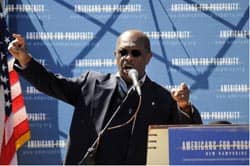 What are American Muslims to say to Republican presidential candidate Herman Cain, whose latest round of statements solidifies his anti-Muslim stance that is becoming so integral to his candidacy? In an interview on "Fox News Sunday" last week, Cain referred to the ongoing fight in Murfreesboro, Tennessee, where some local are trying to prevent Muslims from building a mosque, saying that he sided with the anti-mosque group.

"Our Constitution guarantees the separation of church and state," Cain said. "Islam combines church and state. They're using the church part of our First Amendment to infuse their morals in that community, and the people of that community do not like it. They disagree with it." When host Chris Wallace asked if any community should be able to ban the construction of a mosque, Cain replied, "They have a right to do that."

So according to Cain, Islam advocates the combination of church and state, which goes against the Constitution, and therefore any mosque in the United States can be subject to banishment by the community in which it resides.

Unlike Cain, I cannot speak with authority on how Islam views the mingling or separation of church and state. Muslims, like Christians, are not monolithic in their views of such matters. But what I do know is that in the United States, where the separation of church and state is decreed in our Constitution, American Muslims are comfortable following the laws. Muslims are comfortable abiding by the Constitution that gives them the right to practice their Islamic faith, just as it gives their Christian, Jewish, Buddhist, and atheist neighbors the right to practice other ways of life.

Herman Cain seems to think that Muslims are out to impart their morals on the general population—and indeed, that our ultimate goal is to make America a Muslim country. And for those reasons, American communities have the right to ban the construction of mosques in this country. I guess Cain has forgotten that this country was founded on many principles, one of which was the freedom of religion. Are Muslims practicing their morals in this country? I'm sure many, including myself, are. Do other people not like the morals of some Muslims? I'm sure that is the case as well. Should that be reason enough to ban a mosque? Absolutely not.

Building mosques is not about pushing sharia on this country or about some Islamic mission to mesh Islam with the U.S. government. It's about having a place to worship and gather.

Herman Cain must understand all this. Surely he knows his beef with Muslims is pretty ridiculous. One moment, he'll infer that Muslims need to take a loyalty test if they are to serve in his cabinet. In his next statement, he'll say (weakly) that of course he's not discriminating against all Muslims.

Clearly, Cain understands that in this early election season, Muslim-bashing and jumping on the "creeping sharia" bandwagon are the ticket to getting noticed.

Sheila Musaji, editor of The American Muslim, lays out nearly every anti-Muslim, anti-Islamic statement Cain has made over the course of his presidential run thus far. I urge you to check it out.

So what do you say to such a man, when responding to him only expands his 15 minutes?

In the American Muslim community, this debate is waged whenever any pundit or politician spouts some blatant anti-Muslim statements or rhetoric. Do we counter-respond? Disagree? Engage in debate? Will doing so sway anyone's opinions? Or will it just give more attention to people and statements that probably don't deserve attention in the first place?

What makes this debate even trickier is that even though many American Muslims feel compelled to provide a sane, intelligent response when faced with anti-Islamic rhetoric, Cain and others like him are not interested in conversing with Muslims at all. They aren't talking to us. They're just talking about us, and if we talk back, they won't listen.

I don't think Cain is a man to be swayed from his opinions regarding Islam and Muslims. How do you teach sense to man who said in an interview with Christianity Today, "The role of Muslims in American society is for them to be allowed to practice their religion freely, which is part of the First Amendment. The role of Muslims in in America is not to convert the rest of us to the Muslim religion. That I resent. Because we are a Judeo-Christian nation.... And so I push back and reject them trying to convert the rest of us. And based upon the little knowledge that I have of the Muslim religion, you know, they have an objective to convert all infidels or kill them."

There's so much wrong with that statement, and with so many of his statements towards Muslims, that I, like so many American Muslims, want to take him on. But will it matter? Or is it a waste of time? Are we left completely outside of the conversation about us?

American Muslims answer that question on a case-by-case basis. And at the end of the day, I can only pray that common sense, mutual understanding, religious respect, and human dignity will prevail.