No Flip-Flops in the King's House

July 26, 2011 by Greg Kandra
"Like" the Patheos Catholic Page on Facebook to receive today's best commentary on Catholic issues. 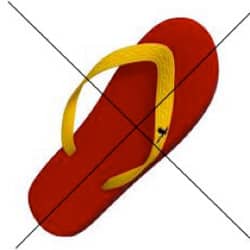 Remember when people actually used to get dressed up to go to church?

When people actually showed up early for mass?

When the pew wasn't the preferred site for a family picnic?

When did all this change? I must have missed the memo. Somewhere along the way, we went from neckties to tank tops, and from fasting to fast food. And it's getting worse. I recently had to tell a couple that no, they could not have their Chihuahua in a tuxedo as part of their wedding party. An auxiliary bishop in Indianapolis recently complained about people who tweet during funerals.

Casual Catholics, it seems, have taken "casual" to a new level.

A few years ago, I posted something about this phenomenon in my parish bulletin. I reprint it below:

BRITNEY SPEARS CONCERT CANCELLED! Unfortunately, our efforts to get pop sensation Britney Spears to perform a benefit fundraiser for the parish have proven unsuccessful. Her calendar is full. Therefore, those who have been arriving at Mass every Sunday dressed for a Britney Spears concert should know that they don't have to do that anymore. Modest church-going attire will do nicely. We will notify you if the situation changes.

PLANS FOR PARISH SWIMMING POOL SCRAPPED! After much study, our finance committee has determined it would not be feasible to construct an indoor swimming pool in our church. Among other things, they report, it would interfere with the valuable work now being performed each Sunday by our ushers, who have enough difficulty navigating the aisles without doing it in flippers and a life vest. As a result, we can now announce with certainty that those who have been arriving for Mass as if dressed for the pool need not do so. Also, we hope to keep the air conditioning cranking all summer long. So you do not need to wear shorts, halter tops or bikinis to Mass.

FAULTY ALARM CLOCKS POSE DANGER! An exclusive parish investigation has uncovered a new danger facing our parishioners: people who enter the church 15 minutes after Mass has started, and attempt to find a seat by climbing over the rope strung across the aisle. This can result in falls or - in some cases - embarrassing displays of underwear. Experts recommend that all Catholics check their alarm clocks every night to make sure they are working, so that they can arrive at Mass on time.

CELL PHONES CAUSE HEAD INJURIES! New research indicates that people who bring cell phones to church are more likely to suffer serious head trauma, usually caused by the priest throwing the lectionary at them. Such people are also more likely to be wounded by hurled umbrellas and rolled up missals. We care about our parishioners. As a public service, then, we are advising all to leave cell phones at home or, failing that, to flick the switch to "vibrate." Medical experts say it will lead to a longer, healthier life. There is also anecdotal evidence that such precautions will keep your neighbors in the pews from digging their nails into your hand during the "sign of peace."

MUNCHIES AT MASS? Rampant rumors persist that the parish is planning to institute a mid-Mass picnic every Sunday. This has led some parishioners to arrive at church with water bottles, yogurt, animal crackers, sandwiches and the occasional box of candy. Rest assured: the only food we will be serving will be of the spiritual kind, at the usual time, at the usual place - by the altar rail during communion. Don't worry about bringing anything else. We have all you'll need right here. Just BYOS. Bring Your Own Soul.