Our Habit Is a Language

Patheos' "The Habit of Witness" series features essays written by consecrated Catholic women and men sharing their experiences while dressed in the habit. In this ninth installment, a Carmelite sister shares small vignettes of the numerous times her habit has helped to begin a dialogue. 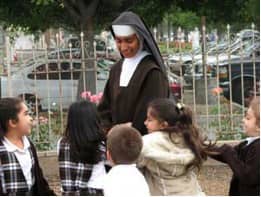 In the Constitutions of our community, the Carmelite Sisters of the Most Sacred Heart of Los Angeles are the following words:

Our habit is a form of language. It says who we are, why we are here, and where we are going. By wearing it, we are communicating God. Our founding sisters suffered for the freedom and privilege of wearing the habit of the Carmelite Order. Their story of persecution, poverty and journey to the United States as refugees should be pondered and meditated upon by every new generation of sisters as they receive their holy habit.

After 48 years of wearing the habit, I often forget the silent language and witness the habit gives until I am reminded by the reaction of people I meet at the most unexpected times and the most unusual places. The following are a few reactions I have experienced, and I am sure that each sister in my community could write a book on her personal experiences.

Witness as a Nurse: For 10 years, I worked the night shift in the Intensive Care Unit of Santa Teresita Hospital with another Carmelite sister, Sister Virginia Therese. There were so many times when a patient would wake up from a major automobile accident or major surgery and seeing two sisters dressed in the white habit at their bedside and their bedside would ask, "Am I in heaven?"

As a Mobile Intensive Care Nurse, I would accompany the paramedics on their emergency calls. One time, we were called to a park where a young man had overdosed on heroin. I was beside him in the ambulance in route to the hospital when he woke up. He had the most puzzled look on his face when he, too, asked "Am I in heaven?" The paramedics never forgot this young man's question.

Catechesis at College: In standing in line to register for classes at a nearby college, a young boy pulled away from his mother in front of us and asked about the rosary he saw hanging from our cinctures. We explained that when we pray the rosary, we talk to God. The young boy immediately grabbed the large medal we have on our rosary, put it to his mouth as said: "God, do you hear me?" He then put the medal to his ear to wait for the answer! We had a one-minute catechesis on how we talk to God in prayer, and how we have to be very quiet on the inside to be able to hear his answer. The little child was very interested.

Spirituality in the Supermarket: After 28 years of working in the hospital setting, I had the privilege to be transferred for seven years to work at our motherhouse in Alhambra, California. My trips to the nearby store became surprisingly spiritual experiences.

Once, I was asked to pick up some nail polish remover for the sacristy to be used in removing wax from the candleholders. As Carmelites we do not use nail polish, but I did know that nail polish remover would be clear. I noted what seem to be several hundred bottles. When I was halfway though my unsuccessful search an employee came along. She was orienting a new employee who was a young teenage girl. "Can I help you sister?" she asked. I explained my problem. She smiled and said "Let me take you to the area were you will find the nail polish remover."

As I followed my guide, the young teenage girl asked me quite angrily: "Why can't Catholics eat meat on Fridays?" I was surprised by the question, but explained in 20 steps or less that the Church asks us to give up meat only on the six weeks of lent, on Ash Wednesday and Good Friday. We do this because Christ came to die for our sins so that we can go to Heaven. During these days of "abstinence from meat, we make a small sacrifice as a way to say "thank you" to Jesus for all He had done for us. With this short explanation, the girls face changed so dramatically from that of a defiant teenage to a face that lit up we great joy and peace as she understood the meaning behind the rule. She could not thank me enough for explaining this to her.

An Ecumenical Moment: On still another day, I was looking for detergent. One lady was looking for the same thing. As I picked up one item, she asked in a very harsh and rather cold tone of voice: "Have you accepted Christ as your personal Lord and Savior?" Again, I was surprised by the question and calmly replied: "I have given my whole life to Christ." She stepped back with the most surprised look on her face: "You have, really?" I gave another one-minute catechesis on religious life. She then spent about ten minutes pouring out her soul to me. She then asked me to pray with her, which I did. This day the detergent section helped clean a very troubled soul and made it whiter than any bleach could do.