Pets in the Pews? 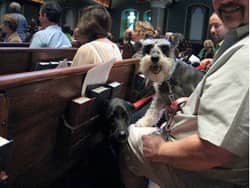 Each October for the last decade, I have joyfully attended the blessings of pets at churches around the country. Last fall, at one service held at a Baptist church in Texas, a family arrived with their dear old spaniel. She was 14 and was obviously ailing. Parents and three daughters (all younger than the dog) gathered around their dog as she was blessed. Then they gently scooped her up and carried her to the car for that last trip to the veterinarian. Needless to say, there were tears all around, from the girls who had not known life without this dog and the parents who had her from the beginning of their relationship, to those of us gathered around, humbled to share in this gentle, sad moment.

According to the 2011 U.S. Census, there are more households now (43 million) with dogs than with children under 18 (38 million). Companion animals are occupying an increasingly significant position in the lives of humans. Increasingly, it seems, faith communities are noticing this shift and making space for animals. Dogs, cats, birds, horses, ferrets—blessings of pets are showing up on the calendars of religious communities all over the U.S. Several years ago I was able to document more than 700 of these and that is a low, low estimate.

And companion animals are showing up on other days as well. Arise United Methodist Church in Michigan hosted "Dogfest 2011" in June and they have a dog park at the church. Woof 'n Worship, Paws and Prayers, Perfect Paws Pet Ministry—these are but a few of the ongoing programs connected to companion animals.

Some might question the motivations for this inclusion of "pets" in liturgy. I like to remind people that animals have been central to worship for centuries; this is nothing new. After studying the history of Christianity for two decades, it is obvious to me that this is a return to more inclusive worship for all creatures. Worship has not always been the sole domain of humans.

The return to the sanctuary, though, is just one step. And companion animals are not the only animals that must be included in circles of compassion. We are facing the extinction of countless species because of human activity; farm (food) animals in the U.S. live in horrible conditions; animals are used for sports that often lead to pain, suffering, and death. We have chosen ways to live that inflict incredible pain and suffering on innumerable animals.

In the history of Christianity, I see animals all over the place. A dog licks Lazarus' sores (Lk. 16), another one accompanies Tobit and the angel on their journeys; God admires the strong horse and the soaring eagle (Job 39); Jesus spends forty days with the wild animals (Mk. 1). Images of animals adorn the great cathedrals of Europe and the smaller churches of villages. As a human being in the 21st century, I must also start to see animals everywhere and to recognize that they live here too, that their existence counts. Certainly, without these animals we humans will no longer exist.

I can't image my life without dogs and Christianity, these two beautiful (though sometimes complicated and troubling) components.

And increasingly I can't imagine life without the two intersecting. "If there is no God for thee, then there is no God for me" (Anna H. Branch poem, "To A Dog"). Only a very narrow religion would exclude most of the creatures on the planet from consideration. Religions must fling their arms, doors, sanctuaries, and hearts wide open to the diverse life of this world—and in doing so will surely bring hope and promise.

Visit the Patheos Book Club to read an interview with Hobgood-Oster and learn more about her new book, The Friends We Keep.