The Problem with "Peace of Mind"

July 14, 2011 by Matt Emerson
"Like" the Patheos Catholic Page on Facebook to receive today's best commentary on Catholic issues. 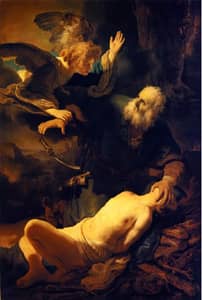 Not long ago, at age 27, I faced a momentous decision. It involved a change in careers. Security and predictability, at least of a certain kind, would become secondary considerations, and I would assume a role I had not planned for or willed.

I had arrived at that point because, after months of discernment, I believed God might be calling me to make a move.

I fought it. Though given flashes of consolation when contemplating the change, worldly concerns -- money, reputation, the desire to be seen as having it all figured out -- urged me to protect the status quo. Moreover, I had spent three years and many anxious exam hours preparing for what I was doing.

I was set to be a lawyer. Now, I was supposed teach?

It made no sense, and I grew frustrated when my speculations about the future couldn't guarantee returns. I wanted assurance the risk was worth it. I remember speaking with close friends, hoping to hear an insight that would cut off my wavering. When that didn't happen, I told a friend, "I just don't have any peace of mind. Maybe next year, but not now."

His words in response were revolutionary.

"Matt," he said, "I'm not sure we get to have peace of mind. Maybe peace, but not peace of mind . . . I don't think Abraham had any peace of mind when he was called to sacrifice Isaac."

That brief exchange in a long, agonizing, and ultimately life-giving discernment came to mind recently when I read additional bleak news about the economy. "Pessimism deepens," declared one Reuters headline. The story joined a queue of others announcing more layoffs, a weak currency, the threat of a second recession, the threat of default, the threat of inflation . . . enough to cause, as George F. Will aptly phrased it, "apocalypse fatigue."

As I delighted in the language, I lamented its truth, especially for Catholics. We know this condition well. The mortgage crisis came quickly upon, and overlapped with, the awful and seemingly endless disclosures about pedophile priests. But while the Vatican has taken measures to stop the abuse, the economic woes have received no such correction. When it comes to the stock market or any other gauge of financial health, it takes exertion to be cheerful.

Of late, however, I've been unsettled less by the headlines and more by the trepidation of friends and family. I've sensed a growing unease and a strident wish to know when and by what means the economy gets fixed.

At root, I sense a desire for peace of mind.

We don't need it.

Let us not forget: Catholics know chaos. We know instability and unpredictability, not simply because of scandal or personal strife, but because of the spiritual heroes of our Tradition.

Think of Moses. When God greets him in the flames of the bush, Moses is "tending the flock of his father-in-law Jethro, the priest of Midian."

Within a few verses, however, that bucolic scene is upended. God instructs Moses to free the Israelites from slavery, lead them across Sinai, and settle in a land ruled by a hostile people. When Moses responds that he's a poor speaker and may not be the right guy for the job, God rebukes him and says, in so many words, don't worry about it.

Needless to say, it doesn't get easier. Throughout the Torah, Moses faces a grumbling and fickle group of Israelites, a God that wipes people out with no warning, and a brother -- Aaron, his appointed spokesman -- who proves, at times, to be as reliable as a flat tire. Even worse, Moses had to carry out the latter part of the journey knowing that, after all his faithfulness, God would not let him enter Canaan.

Peace of mind? You would be hard pressed to find more compelling reasons for its absence.

The stories multiply. We could go back to Abraham or press forward to Mary. At almost every point in the biblical witness, men and women are thrown into chaos by things and events beyond their control. Famines, tyrants, plagues, revolts, and, more often than not, God Himself, disrupt their calm.

But these men and women were willing to walk into the fire and say "yes" to the unthinkable, to see, in the flux and flow of their times, the hand of a loving God. The tradition of discipleship has been built, in other words, by ordinary men and women who, without any guarantees, said, "To hell with peace of mind."

And so it must be for us. We do our best to be happy and to create conditions where our friends and family may prosper. For that we need peace, but we can live without peace of mind.

Peace of mind is the fleeting peace, often purchased with cheap grace or through an unseemly collaboration with the temporal. But, like food, we want the peace that endures forever -- not as the world gives, but as He gives it.