In a recent article in the journal Spiritus, Philip Sheldrake notes that for an increasing number of Europeans "spirituality" offers meaning and authenticity that people believe is impossible to find in "religion." This is, in fact, such a common phenomenon, he notes, that some British sociologists have argued that "in a kind of Darwinian evolutionary development," spirituality is replacing religion "because it is a better fit with contemporary needs."

Observations of that kind are not all that uncommon on either side of the Atlantic. There are countless articles devoted to the conviction, "I'm spiritual, but I'm not religious," and a cottage industry devoted to books and articles on the failure of religion as anything but an engine of violence, prejudice, and superstition.

It is not yet as popular to sandbag religion as it is to criticize the KKK, but we are well on our way. So, perhaps it's time to reflect a bit on the increasingly uncritical attitude we have toward the criticism of religion.

Don't get me wrong. I'm a priest. I don't have any particular interest in defending "religion." For one thing, it's a "suitcase" or portmanteau term designed to describe hundreds or thousands of beliefs and practices—a convenient shorthand for a lot of things that bear only superficial resemblance to one another. And some of what flies under that flag strikes me as bizarre, if not dangerous.

I'm not even all that keen to defend religion in the specific, if by religion you mean religious bureaucracies; narrow, rigid legalism; or, on the other end of the spectrum, the rote, tepid, self-satisfied practice of ritual. I'm not interested in religious institutions that defend themselves, abuse others, or disguise anybody's party politics as the will of God. In fact, give me a Sunday when people are carping about music, flowers, or the length of sermons and I find it hard to go to church at all.

But I am interested in being clear about where the problem with religion lies, because whenever a group of people scream, "There's the problem, that's the culprit," it's important to be sure it really is the problem.

I've done enough therapy to know that when a family system says, "So-and-so is the problem," he or she is almost certainly not the problem. So, if we don't get to the bottom of things, we run two risks: 1) unintended consequences—we could lose something we need; and 2) an unsatisfactory result—we could discover that the problem we ushered out the front door comes roaring straight through the back door in a different form.

Therein lies my difficulty with the argument that if we do away with religion in favor of spirituality, then we will have eliminated a major threat to world peace, a rationale for superstition, and a force for exploitation. I am equally suspicious of the notion that, if we do away with religion, then we will have ushered in an age of peace, transparency, authenticity, integrity, and justice.

If that's the case we are going to make, then let's be done with spirituality as well. After all, James Ray's sweat lodge already has columnists writing articles about "spirituality that kills." And there are hundreds of people out there selling snake oil by the gallon. There always have been, if not always under the label "spirituality."

Now I can hear the atheists cheering, "Yes, do away with it all!" (Thank you.) But before we throw ourselves into the arms of honest, truth-telling skeptics, let's remember that among the world's mass murderers are those who were motivated by anything but religion, including Pol Pot and Idi Amin.

Every great human endeavor or body of high ideals is plagued by the same dilemma. Lawyers can pursue justice or chase ambulances. Doctors can be healers or quacks. Politicians can be statesmen or hacks.

Their behavior doesn't invalidate the pursuit of justice, the act of healing, or nurture of the common good.

The principles of jurisprudence are not irrelevant because some lawyers abuse the law. The principles of medicine are not invalidated by the actions of a few quacks. And the ideals of democracy are not bankrupt because a handful of legislators use the system to benefit themselves. And the problems their behavior presents cannot be addressed by doing away with the rule of law, the practice of medicine, or the democratic process. 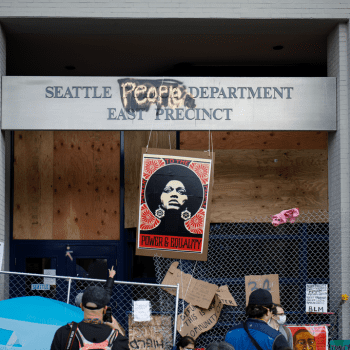 Not Guilty by Reason of Poverty
Gene Veith
4

Love, Rage, & Radical Dharma
Carl Gregg
Get Patheos Newsletters
Get the latest from Patheos by signing up for our newsletters. Try our 3 most popular, or select from our huge collection of unique and thought-provoking newsletters.
From time to time you will also receive Special Offers from our partners that help us make this content free for you. You can opt out of these offers at any time.
see our full list of newsletters
Editor's picks See all columnists