Every summer, while wearing my little girl bathing suit with ruffles underneath my t-shirt and shorts, I sat through Jewish summer camp Torah study, where we discussed the weekly portion. We were little girls, sitting under the shade of a tree in suburban New Jersey, studying the merits of zealotry.

The Balak portion is read in the middle of summer. People are turning to idolatry. A plague rages in the Israelite camps. Zimri, a high-ranking Israelite man from the tribe of Shimeon, brings Cozbi, a Medianite princess, into his tent in full view of the community. The community disapproves. There is weeping at the entrance of the Tent of Meeting.

Pinchas, a direct descendent of the first high priest, grabs a spear and runs into Zimri's tent, killing Zimri and Cozbi. The plague stops. God says to Moses, "Pinchas...turned back my wrath from upon the Children of Israel, when he zealously avenged my vengeance among them, so I did not consume the children of Israel in my vengeance. Therefore, behold I give him my covenant of peace" (Numbers 20:12).

Pinchas took it upon himself to execute two people whose actions did not reach the level of a capital crime. Even if their actions amounted to a capital crime, no court issued a ruling sanctioning the execution of Zimri and Cozbi. Pinchas acted outside the law to take life. Instead of punishment, he received divine favor—a covenant of peace.

Our tradition's two approaches to the story have struggled to understand God's approval of Pinchas. The first approach sees Pinchas as acting outside the law and openly disapproves of his actions, while tacitly acknowledging that God does not share this view. According to the first approach, Pinchas faced the threat of excommunication and was only saved by God's interference on his behalf (Yerushalmi Talmud, Sanhedrin 48b). Pinchas also faced the threat of death—if Zimri killed him, Zimri would not be liable for his death, because Zimri would have been acting in self-defense (Talmud, Sanhedrin 82a).

The second approach explains Pinchas's actions by inventing for him a law that justifies killing Zimri and Cosbi. According to this tradition, Pinchas went to Moses and asked him what should be done about Zimri and Cozbi. Moses forgot the applicable law, but Pinchas remembered the law of "zealots strike him down." This law, which does not appear anywhere in the Torah's text, permits a zealot to kill a high-ranking man who engages in sexually scandalous behavior (Talmud, Sanhedrin 82a). In this tradition, the weeping at the Tent of Meeting is a result of Moses forgetting this law.

However, even under the second approach, the tradition continues to harbor reservations. Sefat Emet, a Chassidic commentator from the late nineteenth century, starts by assuming that even if "zealots strike him down" applies to Pinchas, his actions were still prohibited because he risked his life in the commission of a mitzvah, which is prohibited as a general matter. But, because God approves of Pinchas's behavior, Sefat Emet learns that "a pious man is permitted to risk his life, even when he is not obligated to do so."

While the Sefat Emet finds a legal justification for Pinchas' actions, it is clear that Pinchas was under no obligation to kill Zimri and Cozbi. In fact, Sefat Emet goes on to emphasize the general inappropriateness of Pinchas' behavior by attributing it to "Divine Truth, while we are required to live according to earthly truth" (Sefat Emet, Likutim, Hashmatot). Even if Pinchas was following the law, he is not a model citizen.

The tradition's discomfort and lukewarm support for Pinchas invites me to further travel along this path. My discomfort does not stop with Pinchas.

God, does the rash spear-wielding zealotry of a man who kills his brother and a Medianite princess please you? Is this your Divine Truth? I choose your earthly truth—I mourn Cozbi and Zimri. They may not have been innocent, but neither were they guilty and deserving of death. End the plague next time, before the zealots rush in.

I try to explain the Torah, reconcile it, and understand it. I try to read it provocatively and creatively.

However, the story of Pinchas cannot be and should not be reconciled. This is a moment where the absolutism of Pinchas' zealotry must be met with an absolute opposition to killing for God. This is a moment to step outside the text and declare zealotry unacceptable—there is no covenant of peace in zealotry. We must step outside this text for all the little boys and girls sitting cross-legged under solidly planted trees in Jewish summer camps studying this story on their vacations, wondering about the vengeful and mean God who needed Pinchas to stop the plague God started.

Tell them that God and Pinchas were both wrong.

The most painful religious rituals in the world
Andrew Henry
3 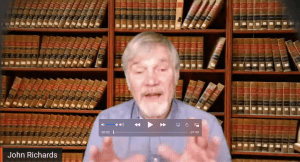 Atheist Productions: The Future!
John Richards
Get Patheos Newsletters
Get the latest from Patheos by signing up for our newsletters. Try our 3 most popular, or select from our huge collection of unique and thought-provoking newsletters.
From time to time you will also receive Special Offers from our partners that help us make this content free for you. You can opt out of these offers at any time.
see our full list of newsletters
Editor's picks See all columnists