July 21, 2011 by Marcia Morrissey
"Like" the Patheos Catholic Page on Facebook to receive today's best commentary on Catholic issues. 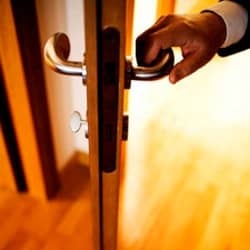 With things the way they are right now, many people are feeling forced into making a lot of choices and changes that they wouldn't usually make.

Transitions aren't always easy, especially when everything about the future seems so uncertain, and we're unsure where our forced decisions may lead.

But sometimes, unplanned transitions—even those we are dragged into, kicking and screaming—can in the long run turn out to be not just unexpected opportunities, but eventual blessings.

In 1997, while we were living in Southern California, my husband Ed was out of work for awhile. He had left a long-time job to take another position with a different company, and when that turned out not to be a good fit, we were in limbo for several months, living mostly off savings, and wondering what to do. As time passed, things became more and more stressful.

Ed went on interviews but nothing seemed to be working out. We tightened our belts to the last notch! I became pretty inventive with recipes in order to use up what we had in the pantry, and tried not to go to the grocery store any more than we absolutely needed to. At first Ed went with me to shop, but that didn't last long. As a single mom, I'd had plenty of experience at living on a tight budget, and when Ed began questioning me on every item, I decided this was really a job I could do easier on my own.

He admitted later that he was even getting on his own nerves, as the job hunt went on.

As I prayed for direction for both of us, Ed talked to a company in Minnesota, and I quickly added a P.S. to my prayer: "Please, but not in Minnesota."

At which point, it seemed like I heard doors slamming all over California—bang, bang, SLAM!

Minnesota was the door wide open.

Moving wasn't something I was thrilled about, and it wasn't an easy transition at first. We didn't even sell our house right away, in case things didn't work out. A friend of mine told us about a family they knew who would be great renters, so I felt a bit better about that, but leaving family and friends behind for a job was very difficult, for both of us.

Ed moved out, with his dad along to help share the driving, while I stayed to do the packing, and deal with the movers. I had never lived anywhere except California, and for me snow was something you drove to in the mountains for a ski trip. Ed tried to make me feel better about living in Minnesota by telling me that there were things to do in the winter months for fun. He told me that you could drive out on the lakes through ice castles they built for a winter festival!

I said, with genuine horror in my voice, "You are kidding, right?! It gets so cold that you can drive out on the lakes?"

Actually, as I write this we are dealing with such high heat and humidity in the mid-west that ice castles don't sound so bad at the moment.

When people hear that we are originally from California and ask why we are in Minnesota, my standard answer is that we moved here for the weather!

All joking aside, the first eighteen months here were not easy. The move brought to the surface some family issues that we needed to unpack, especially for our son. His whole teenaged world had changed, and he had a really tough time adjusting, at first. He was just starting his final year of middle school, and it was no easy for him to leave the kids he'd been with since Kindergarten. By his freshman year, however, he had begun to make some good friendships, and his best friends today are the ones he made after the move. In fact, his junior-year sweetheart later became our lovely daughter-in-law!

In reality, it took us a couple of years to really adjust to a move we had made with such reluctance. Little by little we began to meet new people. We had to make the effort to reach out, though—to make the most of what was before us. This was especially true for me as a blind person; in California, I'd had a well-established support system, and in Minnesota? I called our new church and began to get involved, making friends in different volunteer groups. Through our increased involvement at church, and with Marriage Encounter we began to meet some wonderful new friends, and we now feel really at home, and have a stronger connection to our community than we had ever imagined we would.

Transitions are not easy, but sometimes they lead us toward new possibilities, friendships, and opportunities we wouldn't have experienced unless we were forced onto a detour in our lives. We are now very happy here, and looking back, we wouldn't change a thing.