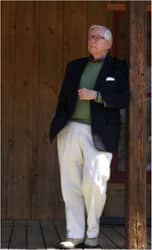 R. Kirby Godsey, Ph.D., served 27 years as President and CEO of Mercer University before being named Chancellor in 2006. During his successful tenure, the enrollment grew to more than 7,300, and the endowment increased to more than $200 million, with another $300 million in planned giving commitments. He established seven of the university's eleven schools and colleges, including schools of business, engineering and medicine; an academic press; a performing arts center, and an engineering research center. He also led the merger of Georgia Baptist College of Nursing with Mercer. He developed academic partnerships not only across the state, but also around the world. He has served as a member of the Executive Council of the College Commission for the Southern Association of Colleges and Schools (SACS) and on the Executive Committee of the National Association of Independent Colleges and Universities. SACS recognized his outstanding work on accreditation standards by awarding him its highest honor: the Distinguished Leadership Award.

He is Chairman of the Board of Birch Communication in Atlanta, Chairman of Myers McRae and a Director of NewTown Builders, LLC. He is a member of the Board of Directors of the Rome Chamber Music Festival in New York and the Peyton Anderson Foundation in Macon, Georgia.

Awards
In 1998, 2000, 2002 and 2003, Dr. Godsey was named as one of the 100 most influential Georgians by Georgia Trend Magazine. In 2002, he was named the Council for Advancement and Support of Education (CASE) III Chief Executive Officer of the Year. The Macon Chamber of Commerce recognized him in 2003 as the Macon Citizen of the Year. In 2006, he was awarded the Salvation Army "Others" Award, the highest honor bestowed by that organization. And, in 2006, both the Georgia Senate and House of Representatives honored him their chambers for his contributions to Mercer, higher education and the communities served by the University.

At its April 2006 meeting, the Mercer University Board of Trustees voted to name the historic administration building on the Macon campus as the R. Kirby Godsey Administration Building. At that same meeting, the Trustees named Dr. Godsey as chancellor and university professor.

Author
Dr. Godsey's first book, When We Talk About God, Let's Be Honest (1996) was branded as "heretical" by the Georgia Baptist Convention at its release then widely embraced by mainstream and moderate Christians, selling over 24,000 copies. In 2005 two books, The Courage Factor: A Collection of Presidential Essays and Centering Our Souls Devotional Reflections of a University President, were published, gathering a treasury of the wisdom and inspiration Dr. Godsey shared during his leadership at Mercer. In May 2011 Dr. Godsey will release Is God a Christian?, a thoughtful, revolutionary book which challenges readers to consider a loving God, big enough for all God's children.

A dynamic and engaging speaker, Dr. Godsey is asked to lecture on a range of topics from theology to leadership  to writing to race relations and beyond.  His lively, thoughtful presentations engage and inspire audiences across the South.

Dr. Godsey is a member of First Baptist Church of Christ in Macon. He and his wife, Joan Stockstill Godsey, have four adult children, Raleigh, Hunter, Erica and Stephanie; and five grandchildren.

Return to the Patheos Book Club on Is God a Christian? for more resources on this book, including book excerpts and an author interview.